Those who stand in front of a hot loaf fall into one of two camps: people who rip into the steaming thing without shame, and those who let it cool before sampling. (There are also peak-pinchers, but that’s another strain.)

I’ve always been the kind of person who waits for a loaf to cool before tasting, especially when we’re talking about bread. I do think that prematurely slicing into a hot loaf of bread (and particularly rye bread) will prevent the inside crumb from cooking fully and evenly.

But today I made a savory quick bread that I could not resist. I dropped it carefully from its loaf pan, nudging it to sitting position with my knuckles, like a hot potato. Steam rolled up its edges. I took a knife to one end; it buckled a bit—way too hot, my friend!—but I managed to pull out a nice slice. Before I knew what was what, the crust slice was long gone and another one laid half-whittled on the board.

Skipping breakfast might have had something to do with that, but I also think that the French do the quick bread right: this one has cubes of ham, zucchini and lots of grated gruyere … all the comfort of zucchini bread, none of the sugar. It’s like a giant gougeres, or French cheese puff, with a dose of American loaf-style practicality—and ham, which is always welcome.

Ever since I read the piece in the New York Times about French savory cakes (the article is here) I have been meaning to try this recipe. I rarely pass on a pre-published recipes here on the blog because I usually can’t resist tinkering significantly with the ones I find (and also, because I have some weird Minnesotan ethic that pushes me to always Work harder! Be more original! Be more authentic!) but this recipe was so good I dared not change a thing.

(I take that back: I added cubes of zucchini to the batter. But this time of year I add zucchini to nearly everything, almost without notice, and it was a good addition.) 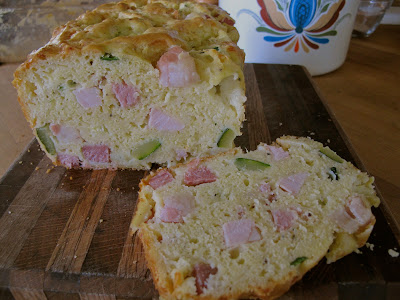 Savory Zucchini Bread
recipe from the New York Times
Unsalted butter for brushing pan
1 3/4 cups all-purpose flour
2 teaspoons baking powder
3/4 teaspoon salt
1/4 teaspoon black pepper
3 large eggs
1/3 cup milk
1/3 cup extra-virgin olive oil
6 ounces baked ham, cut into 1/2-inch dice (about 1 1/4 cups)
6 ounces gruyere, coarsely grated
1 1/2 cups diced (1/2-inch dice) zucchini
Center a rack in the oven and preheat to 350 degrees.
In a large bowl, whisk together the flour, baking powder, salt and pepper.
In a medium bowl, whisk together the eggs. Combine the milk and olive oil in a liquid measuring cup and pour in a thin stream, whisking, until incorporated into the eggs.
Using a rubber spatula, fold the wet ingredients into the dry, mixing until just combined. Fold in the ham, cheese and zucchini. (The batter will feel stiff.) Pour into a buttered loaf pan.
Bake loaf until golden and a toothpick inserted in the loaf comes out dry, with a few crumbs attached, 45 to 50 minutes.
Transfer the loaf to a rack to cool for 10 minutes before unmolding: run a thin knife around the perimeter of the loaf and upend it. In theory, you should really let this cool before slicing. A serrated knife makes the neatest slices.