I make an effort to keep my lunches unpredictable and varied because I feel that eating the same thing at the same time every day isn’t good for us; it’s something an old dog does. I base this assumption on the hunch that people are meant to take in as many tastes, textures and nutrients as they can.

But when it comes to the Vietnamaese bahn mi sandwich, I’m a plodding old hound ambling up to her dish. There have been stretches of time—the winter of 2008, for instance—when I ate bahn mi sandwiches for lunch at least four days out of seven. I allowed this in the hope that indulging the obsession might cause it to eventually run out of rope, that I would someday just get sick of the deliriously good combination that makes up a bahn mi sandwich:  the charred sweet sheaves of meat, tangy strings of pickled carrot and daikon radish, cilantro and cucumber all bound together beneath a cool blanket of mayonnaise … a swipe of liverwurst to add background, a bullet of fiery red chili sauce for heat, and the sum of this ensconced in a softer, kinder and gentler-to-the-mouth version of the classic French baguette. 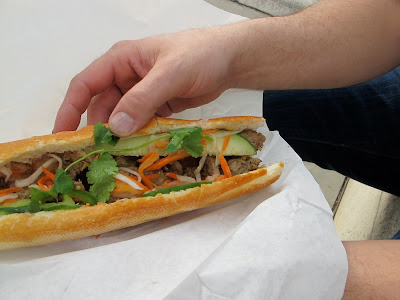 Of course the boredom never came. How could it? There’s just too much going on here, and all of it is good.

I was in Los Angeles this week and found an excellent bahn mi at a food truck parked outside a museum. Like New York, LA is a city gripped by an obsession with both bahn mi sandwiches and portable food trucks. If for some reason you haven’t heard, large trucks such as the kind that serve treats at fairs are staffed by excellent chefs and are equipped to cook and serve food anywhere they can park and unfold a counter. They’re on the move, parking themselves at a different meter every day, sometimes twittering their location to a devoted band of loyal foodies and fans. Many of the trucks in LA are devoted to tacos, but some serve fancy hotdogs, others southern barbecue, and more than a handful serve bahn mi sandwiches.

When I spotted one last week the pang of missing my favorite Brooklyn bahn mi shop quickened my pace across the street. Would it measure up to Hanco? Would they be as good as the bahn mis in the St. Paul Asian markets? Would they have bubble tea, too?

Oh yes, yes and yes. I ordered a grilled pork bahn mi and watched them layer it on: a smear of mayo, a curlique of sriracha, a thatch of carrot pickle, a crown of cilantro.

What is this madness and why is it so addictive? This is a sandwich with genuine vivid energy, a phenomenon that only seems to happen with two cultures run smack into each other. No doubt the bahn mi probably wouldn’t have come to be if the French hadn’t colonized Vietnam and introduced liver pate and baguettes into the cultural lexicon. But thank god the Vietnamese knew which things to steal and which to keep and that they had the impeccable taste to combine them.

Then we had a little lamb…a tender little baby lamb ›