Do you think our grapes will make it? 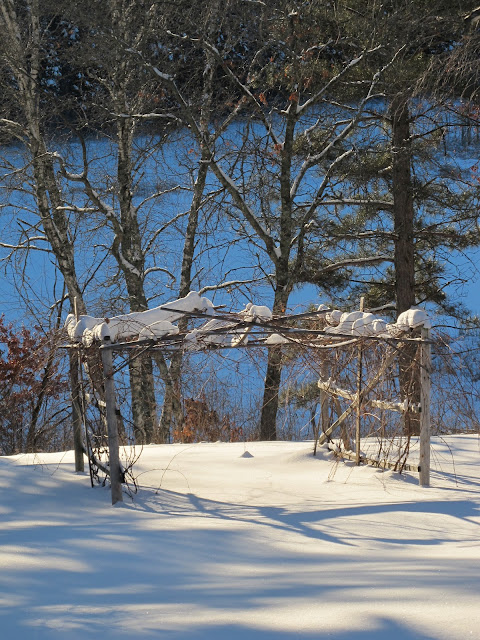 We’ve had an extremely cold winter here in Two Inlets, Minnesota, i.e., one of the coldest places in the country. It has been so consistently cold—20 below, 30 below zero—that my three-year-old has learned the meaning of the word “brutal” (and uses it often); that my mukluk boots squeak and shuffle against the bleached frozen ground as if rubbing against a piece of dry, hard styrofoam; that the truth of this arctic landscape on which we somehow make our home comes out in hushed early morning conversations with family and close friends. Just as we call friends at four in the morning to tell them to go outside and look at the northern lights, so we call them at four in the morning to ask them to check their thermometer and see if they’ve got 40 below, as we do, or worse. If they’ve got colder, then we know for sure that our thermometer bottoms out at 40 down. And this is something we should know.

A string of weeks with temperatures that loiter well below zero calls for something stronger than a mere stew, though hot liquids do help with resiliency. Last week, I needed to make something seriously warming, a recipe that forms its own cocoon.

Chicken with forty cloves of garlic should do it. This is a recipe that calls for mixing chicken with forty cloves (about four heads-worth) of garlic, herbs, a heroic amount of olive oil, and then battening down the hatches and sealing the joint between the pot and the lid with a cord of raw bread dough. The bread is not meant to be eaten but instead functions more like weatherstripping. It causes the contents inside the pot to suffocate in, and then succumb to, their own juices. 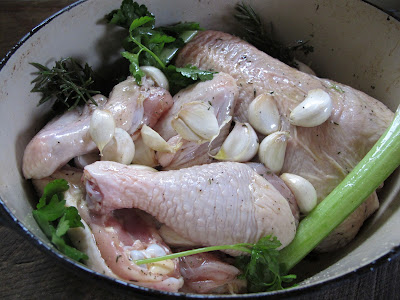 The sealed pot is essentially an oven-within-an-oven. It’s almost like baking. 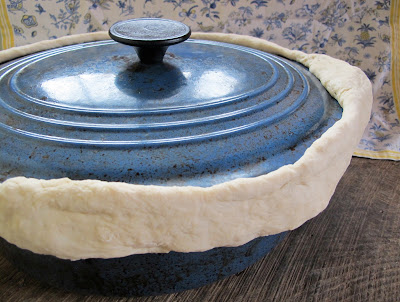 Armed with one of my monstrous farm-raised chickens and a promising recipe from one of my favorite cookbooks, Simple French Food by Richard Olney, I jumped in, following his recipe bead by bead. And I was not disappointed. Two hours after sealing the pot I cracked the bread, opened it up and was met with this sight: the chicken, in the very pattern in which I’d laid it down but now with a new bronze cast. Clouds of earthy, almost metallic rosemary and garlic rolled up, strong enough to fill twenty households. 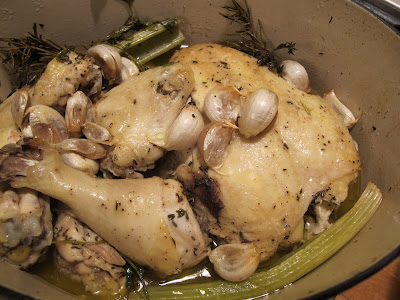 Okay, so I did change one step. My chicken was muscular, so I thought it would be better to cook it a little slower for just a little longer. And I thought that a full 2/3 cup of olive oil sounded dangerous, so I scaled it back to a mere 1/2 cup. (You can successfully reduce it to 1/3, I think, and still open the pot to a passel of olive oil- and chicken juice-infused cloves of garlic.) And I added rosemary.

Not counting those little things, I followed it to the letter.

And if you could put aside the ridiculously lush, tender chicken for a second, here was the real treat of the dish: a garlic clove, falling out of its brittle paper, collapsing on a piece of toast. 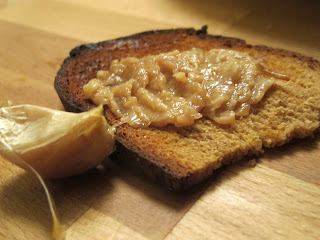 Put the chicken, garlic, olive oil, salt, a generous amount of black pepper and thyme into an earthenware casserole, turning around and over repeatedly with your hands to be certain of a liberal and even coating of oil. Force the celery, parsley, bay leaves and rosemary into the interstices of the chicken.
Prepare a dough of flour, water, and a dribble of oil—it doesn’t have to be smooth, but it should be pliable and soft enough to make a snake shape—and roll it into a long cylindrical band. Cover the casserole with a lid, moisten the ridge of the casserole and press the roll of paste into place. Cook in a 325 degree oven for two hours and break the seal of paste at the table.

‹ Steak in the Sauna

An Amish Dinner with Apple Tart ›