When I worked at the Schwarzwald Inn on Main Street in Park Rapids (it’s a German-inflected American Diner) we had a section on the menu called Sandwiches fur den Arbeiters (or something, excuse my German, like sandwiches for the worker), hot sandwiches that involved stacking clods of roast pork or beef—or three hamburger patties—between squishy white bread, cutting the sandwich on the diagonal, spreading out the points, dropping a ball of mashed potatoes in now yawning space in the middle and covering the entire thing—to the plate’s golden border—with tanned, leatherish gravy.

Now, most of the food in Berlin was far better than anything at the Schwarzwald, but I picked up on some sort of German guiding principle that made this hot beef possible in the first place.

In the mornings we ate these enormous sandwiches (above).

I couldn’t keep up that pace if I lived there, but I woke up every morning thinking about that awesome pumpkinseed bread (kurbiskernol brotchen). I never finished them. Now I know where the German side of my family gets their idea of a serving. Germany is a country full of food-pushers, feeders, pushy women like my Grandma Dion who heave new hills of unwanted food onto your plate when you turn your head.

At Galleries Lafayette food court, I found these—the most adorable sausages I’ve ever seen. I just had to buy them for Aaron, though I probably ate more than he did. They were tangy, like soppressata. Some are rolled in dried herbs, others in black pepper and some in pecorino cheese. 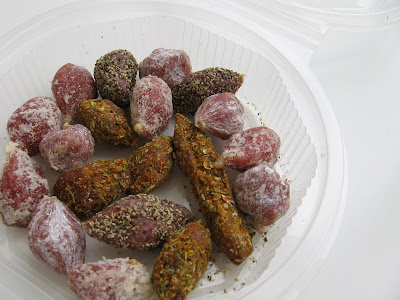 Now, my half-eaten piece of rhubarb meringue cake. It was lovely (crisp on the bottom and everything below the marshmallowy sugar cloud was brilliantly unsweet) but again, it suffered from a portion control problem. I kind of felt like the incredible shrinking woman over there … all the food just kept getting bigger. 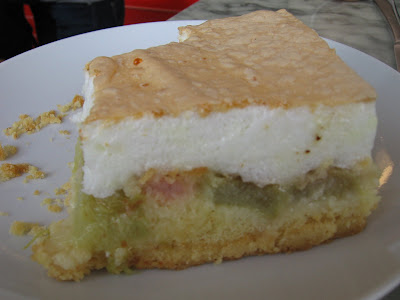 I felt like a tool taking a picture of my breakfast sandwich, but whatever. I took better stock of the whole food experience as I pored over German cookbooks at the wonderful Dussman (like a more upscale Barnes and Noble). I realized that every time I go to Germany I realign my culinary sights, or widen them, to include humbler ingredients. Like, “oh yeah … a good potato with flaxseed oil. So nice.”

The thing I like about German food (good German food, I mean, and it’s not ubiquitous over there) is that they give their plain jane ingredients higher aspirations. Potato salad, for example, can be inspired, with just the right amount of vinegar and perfect miniature cubes of bacon ; bitter greens get an artful and generous sling of tangy dressing and they never crush the greens; they make about 30 different kinds of pancakes, some flat and flappy, some soaring, some cumulous … but in general, it’s generous cooking, and honest, and I believe that those are two qualities that any important cuisine requires. In some ways, German food is a lot like Midwestern food: there’s a big fat bland lid sitting on top of this sincere, vibrant, fresh food culture. It takes just a little jostling to shake it loose. And even though it’s a very generous cuisine, the good stuff always shows a certain sense of restraint.