Butchering a Pig in the Yard, Part Two

Before I began the second side, I had to take a minute to regard the impressive accordion of fatback—and to give thanks to these Amish farmers who did such an amazingly fastidious job on this hog. I counted three specks of sand, all of which I simply picked off the surface, and those probably blew in on the wind.

You’ll note that they skinned the hog. It was my choice: they said that they didn’t scald hogs, but they’d burn and scrape off the hide, which sounded time-consuming and disgusting and I wondered how clear the skin would actually be when they were done … and as they lacked refrigeration, I didn’t want to make the choice to bring heat near the meat.

So even though I do appreciate a nice bit of crackling skin now and then, I had it “skunned” (as they say around here).

I realize that I omitted some key steps in the preceding post; namely, the ham, the hock and the organs. I cut off the hams, wrapped them in huge dishtowels and shoved them into my refrigerator; the next day I drove them to my cousins’ butcher shop, two hours away, for smoking. They dry-cure the ham and then smoke it over some top-secret blend of wood to which I am not privy. It might have some fruitwood in it, and it gives the meat a distinctive background tang.
The organs were dropped into cold water to chill, then packed into a cooler overnight. The liver was clear and lovely. I cryovacked it straight-away and dropped it into the freezer, where it will wait until I make pate grandmere later this month, for Christmas. 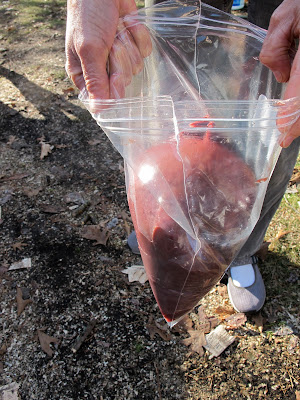 And the head. I had intended to spare you, but since my 3-year-old got an eyeful, so shall you all. He seems not to have suffered any emotional trauma from this, or from the deer-abattoir of the week before. In fact, two days after this was taken, as we were sitting down to a breakfast of fresh sausage patties and toast he said, “Mama? Our pig tastes ged.” This from the kid who’s coming off a month-long mac-n-cheese fast? Monumental. 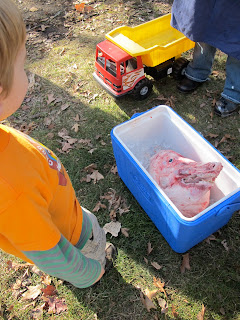 You might notice that the ears are missing. Yeah, the feet are gone too. Either they tossed them (impossible to skin, the ears and feet must be scalded) or they saved them for themselves. I would have liked to have dealt with them myself, as I really do like braised, stuffed trotters—that lip-smacking gelatin, the rich meat … so delish—and I’ve been wanting to try breading and frying the ears. So next year I will ask them for these parts.

(I think this just became an annual event.)

I will definitely need to prepare an outdoor burner for the scalding, though. The last time I tried to scald pigs’ feet and ears inside the house was almost four years ago, when one of my cousins came up to process a hog for us. He did the dirty work and I walked away with two buckets of precious parts.

I could almost smell the braised trotters over de puy lentils—if it weren’t for the enormous plumes of pig-stall fumes traveling from the pots up to the rafters—and inside the pots, of course, the hair remained stubbornly stuck to the skin. My husband came inside, shot me a bloody look, stacked one pot on top of the other and threw the stinking contents into the woods. I remember being thankful. At the time little Hank was still in the hopper, just about two weeks to the finish line, and at that moment the chef lady toddled over to the glider, sat down and surrendered herself completely to the squeamish pregnant lady.

Okay, so, we have plenty of meat here. There’s no need to mourn the second loss of the feet. We will catch up with them someday.
Second side. You see that sheet of white fat covering part of the ribs? That’s the leaf lard, the stuff I’ve rhapsodized about before.
(Look at the kid: No big whoop, just a pig’s head, and he’s back to truckin’.) 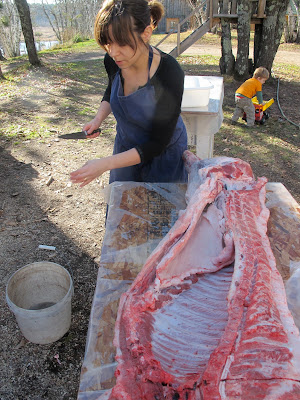 This leaf lard may not look like much, but it’s just one step away from the most decadent, old-fashioned pie crust ever—minus the kidney. On second thought, maybe not. All the kidneys I’ve sampled in the past have always had that twinge of strange acidity to them, a not-so-curious sourness, but these, spanking fresh and coming from such a healthy, wholesome pig (an Amish pig, for christssake), I vow to try. I should put them together. Some steak and kidney pie, perhaps? 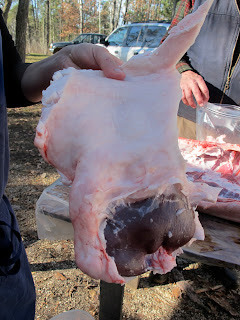 The second time around I took better care of the tenderloin. It was easy to remove in one nice piece. 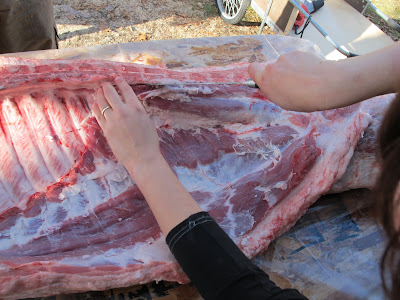 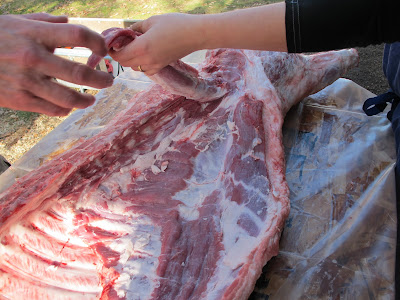 Okay, so this is how I removed the ham from the other side, too. I pulled the hog to the edge of the table, made an incision above where I thought the joint might be, then started pushing down on the leg. The shiny ball joint bobbed to the surface, and I simply cut around it. 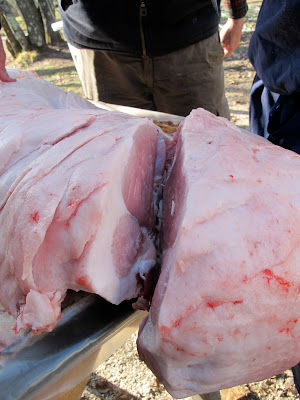 Next I separated the shoulder from the abdomen. I cut it a little less generously this time: more belly, less shoulder. Not consulting the Mangalitsa pdf anymore, this side I cut up intuitively, following the divisions that felt most natural. It turns out I fabricated this one American-style. 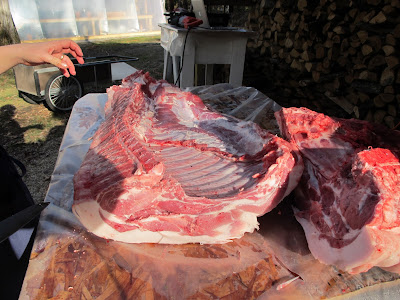 We got out the sawzall again, to remove the chine bone once more. We’re old pros now. 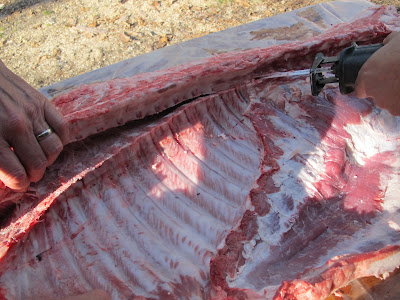 Spareribs against blue sky …  what a beautiful sight. More of the second side after the jump. 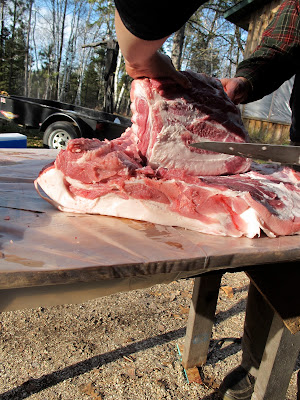 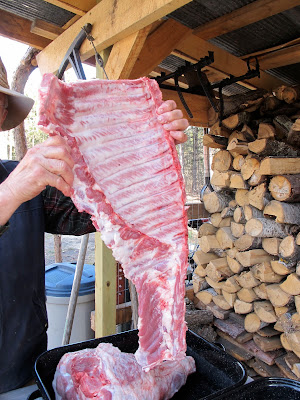 A nice pearly-pink side of spareribs. I can almost smell the indirect grilling now. A spice rub, salt dust, some oak and old grapevine smoke … that’s all this will need. I will be saving this guy for the first light of spring. 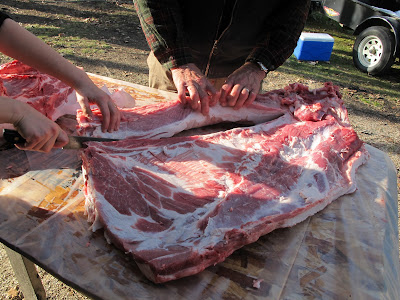 Here we cut the pork loin from the belly, doing an o-kay job. Next year I need to work on my loin removal. I think they could have come out cleaner and more complete. 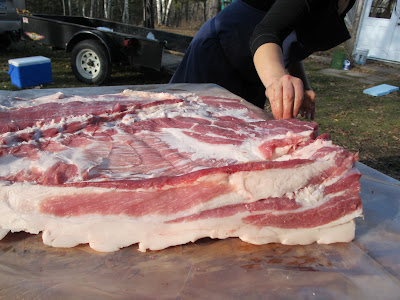 I love this belly pic. It’s fatty but meaty. And it’s not nearly as chubby as some of these hogs that chefs are butchering now for charcuterie. They’re tearing into hogs that weigh upwards of 400, 500 pounds. I can see how the mature hogs would make exemplary hams and salamis, but honestly, this one had enough fat for me. I bagged and sealed at least ten pounds of pure lard, some in large pieces for making lardo, the rest for grinding up or rendering down.

As I worked on this pig a lot of decadence began to swirl in the menu in my head, but one thing I am surely making is chicken fried in lard. (What about chicken-fried liver fried in lard?  Or just chicken-fried lard? Add some bacon to that? If we eat anything like this we will have to start a project involving the dry-stacking of field rocks from the front 80.) 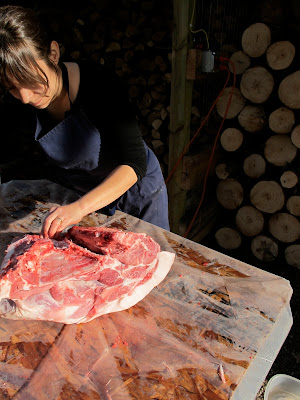 Here I am dealing with the second pork shoulder in the warm afternoon light. The first I left in one big piece; the second I will split into Boston butt and picnic. 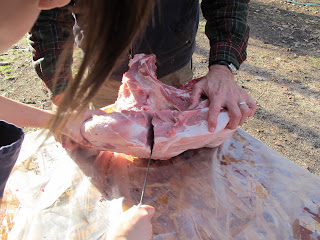 I am following my plane of incision, the point of my knife seeking the joint. 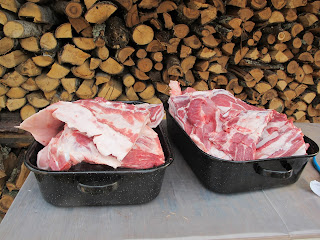 This is most of it, minus the hams, the head and the organs. 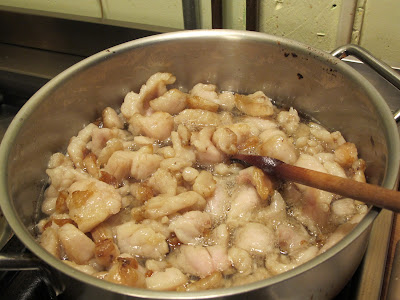 It wouldn’t be a proper butchering day without making something straight-off. I was by myself in the kitchen so I didn’t have the time to make sausage that day, but I did start a pot of leaf lard to rendering. 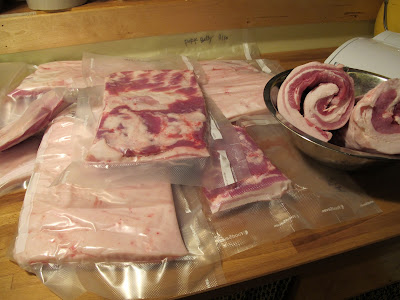 Mostly, I hung out with all my belly, none of it destined for the smokehouse. (My family makes great bacon, so I can just buy that.) No, I had other plans for these slabs. Two of them were going down for pancetta, some of them I’m going to cook sous vide and then give them a black maple glaze (recipe here) and I really would like to try to make a chinese hot pot with the fresh belly. I worked in a Chinese restaurant for a year in NY; when the Chinese cooks said pork they usually meant pork belly, sometimes stir-fried and other times braised until tender. 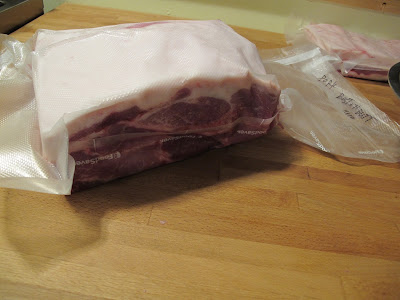 This one is for my mom. She makes a wonderful slow-roasted Boston butt rubbed with thyme, garlic and sage. She lies about how long she cooks it, saying, oh, three hours or so. No. She bakes it for almost five hours, until the edges of the roast turn into a salty, garlicky, black-peppered scaffolding of sorts, barely holding up the soft, collapsed pudding of meat inside. It’s amazing.

I know that all of the recipes I’ve mentioned thus far are visions. Bona-fide ones will follow, promise.

But here’s what I used to make my pancetta, from Michael Ruhlman and Brian Polcyn’s excellent book, Charcuterie: The Craft of Salting, Smoking, and Curing. I have one already rolled and frozen in a few batches, and the second one is coming out of the cure today.

‹ How to Butcher a Pig in Your Front Yard