I had given up the hope of ever finding chanterelles here. It seemed that our dusty-bottomed, pine-needled woods would never give them up.

But then one day, as we were sitting down to a proper dinner out on the porch (both the dinner and the alfresco part being rarer and rarer these days … ) a tiny truck pulled up, rusty but agile, clearly a feral sort of woods truck. And our friend T. popped out, looking a bit wild himself, and loped to the house swinging a lovely wooden basket which was, as he came closer,  full of chanterelles!

“I took these to the OBT and no one wanted them.” He laughed, knowing full well the value—both gastronomic and economic—of these mushrooms.

(That’s Osage Bait and Tackle to the uninitiated, a bait store within a bar within a restaurant—of the freezer-to-fryer variety—and that night anyway, it was full of chickens.)

I accepted the basket gratefully before asking him to join us for dinner, right after which I fetched my stiff brush and started carefully brushing their tops and gills, using a paring knife to take off their dirty bottoms and gently scrape away the tough skin there.

They were pretty lovely specimens. I handled chanterelles often during my cooking days and these were just as I remembered, if not fresher-looking than the ones we used. I didn’t need the mushroom book (though I would eventually take an identifying spore print); I knew immediately that they were safe because my hands recognized them—their putty-ish orange surface, as if they’d been sculpted from latex. Also, unlike their lookalike, the ominous-sounding Jack O’Lantern mushroom, these grew individually and not in clumps, and their gills didn’t always connect from the base to the tip; they showed the occasional run or clump, which is a chanterelle giveaway.

Beneath them he had tucked some hens of the woods, too. They’re tougher, and longer-lasting, so I thought I’d confit them in olive oil sometime that week. But the chanterelles, we were eating those as soon as possible. 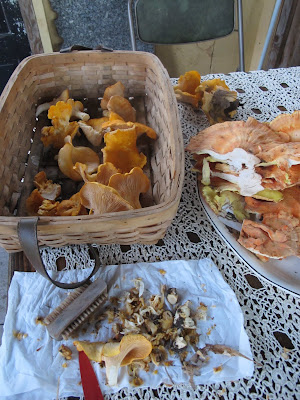 I’d messed up wild mushrooms in the past, by over-decorating them … not this time. I was going to keep it simple and let the chanterelle flavor come barrelling through.

So I mixed up a batch of pasta dough, using this Mario Batali recipe, and then, with some help from my wee assistant, started making the tagliatelle: 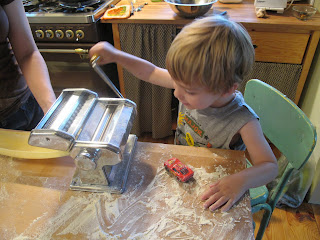 I browned a stick of butter (yes, a stick; these are chanterelles!) in a pan, added a couple of sprigs of rosemary and took it off the heat. The butter rose in a heavy foam, the bubbles spilling over the rosemary, spewing sweet pine scent. Then I added the sliced chanterelles and the garlic, along with a little olive oil to keep the butter from overcooking, and sauteed until the mushrooms wilted and tasted cooked through. I then added about a cup of fresh corn kernels and cooked it all another minute.

When the tagliatelle was done, it was time to toss and to add grated parmesan: 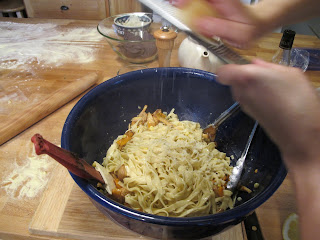 and then to sit down with to our plates: 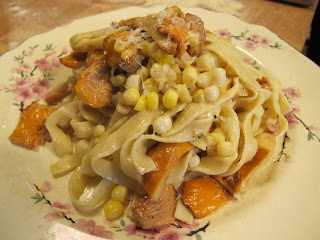 My brother pointed out that I should have kept it simpler—just brown butter, chanterelles. What was up with the corn? I bluffed and said it was a classic pairing, corn and chanterelles. I looked over and his protests seemed to be muffled by an enormous tangle of tagliatelle. It was either what I said or what I made that caused him to buy it. At any rate, it was a dish that couldn’t be made any other week of the year, in any other place.