Did anyone else grow up with Cheesecake Cupcakes? My mother lined her cheesecake cupcakes up in rows in a plastic snap-top container and kept them in the second refrigerator in the basement laundry room, where the cheesecake part hardened to a creamy clay, and the sour cream puddle solidified to a cheese. The center spots of jelly remained bright and glowed like beacons. And on the dull days of summer, as my friend and I shuffled around the dim basement, avoiding the bright running life outside, they called to us.

We ate tons of them, usually grabbing two at a time, either nibbling from the centers out or working to the middle from the side.

Last week, I revived them for Easter. To hook the interest of my 5-year-old, I dug in the candy bin and came out with some gel coloring. (Any opportunity to give something false coloration; he’s into that.) So the sour cream centers became a dark golden yellow, which looked nice against the ruby-red of the raspberry jam and the natural white cheesecake. (It also made the entire thing look like an egg—a fertilized one at that!—which was purely accidental. That they looked vaguely ovarian was the private joke I carried around all day.)

For the recipe, which my mother couldn’t remember, I looked to two sources: The Pine to Prairie Cookbook, an upper-Midwestern home cook’s bible from 1981, and Bakewise by Shirley Corriher, which is my own baking bible. Shirley spares nothing in making the most decadent, perfect versions of the world’s most iconic desserts. She attacks each recipe with a scientific mind, and reading this book you’re aware of all of the work, the repeated recipe testing, she went through to get the final, perfect result. In this case, she went diving for cheesecake with that perfectly dense yet creamy texture, and came up with a batter heavily spiked with sour cream and whipped cream. That last addition results in a texture that’s fluffy-creamy rather than dense-creamy, but it’s ideal, I think, for the cheesecake cupcake. 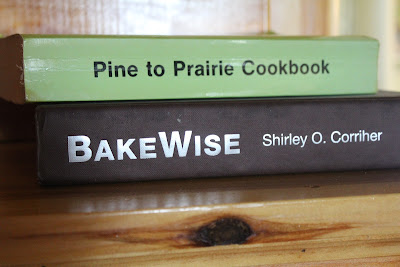 I think it might have been even creamier if I had poured the batter into a single pan and just-ever-so-slightly underbaked it, as the recipe directs. But even divided into 24 paper cups, the batter makes a creamy cupcake, much more delicate than my mother’s, in fact, which were delicious but less fragile. They were intended as road food for wandering summer children, so that made sense.
I had to reference Pine to Prairie for the sour cream topping, which is just sour cream and sugar, mixed together. It is some sort of miracle that the topping turns into something like mascarpone as it bakes. Incredible.
You want to use a tart jam for the filling, not too thick (which will sink) nor too thin (which will run). If you look for a jam that has the perfect texture for a peanut butter and jelly sandwich, you’ve got it. 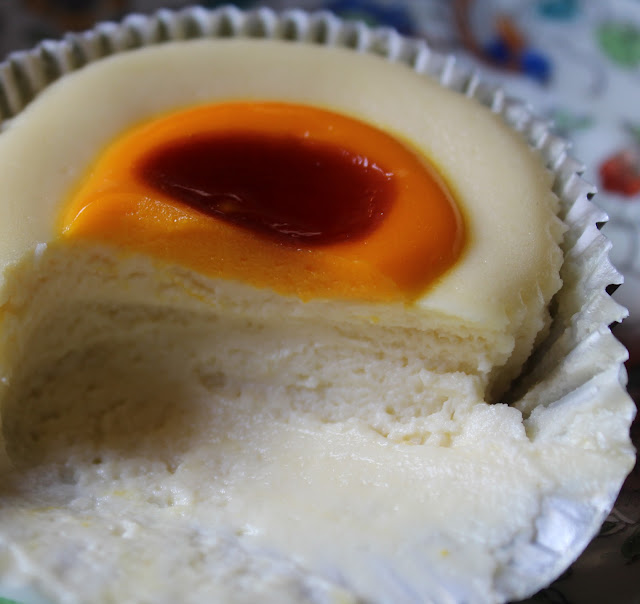 Cheesecake Cupcakes
adapted from Bakewise, by Shirley Corriher
Makes 24 cupcakes
3/4 cup heavy whipping cream
Two 8-ounce packages cream cheese
1 cup sugar
3 large eggs
1/4 cup maple syrup
2 teaspoons vanilla extract
1/4 teaspoon salt
2 cups sour cream
1/2 cup sour cream
1/4 cup sugar
seedless raspberry or black currant jam
Preheat the oven to 300ºF. Drop paper liners into two regular-size 12-count cupcake pans.
Pour the cream into a large bowl and whip with a whisk or a mixer to the soft-peak stage. Reserve in the refrigerator.
In a food processor fitted with a steel blade, or in a large mixing bowl with a beater, blend the cream cheese and sugar well to remove all the lumps. Beat in the eggs, one at a time, and blend well after each addition. Blend in the maple, vanilla, and salt. If using the processor, pour the batter into a mixing bowl. With a large spatula, blend in the sour cream. Gently fold in the whipped cream.
Divide the batter among the 24 paper liners. Bake the cupcakes for 30 to 35 minutes, until they rise evenly and no longer jiggle.
Meanwhile, stir together the sour cream and sugar for the topping, coloring it with a few drops of yellow food coloring if you wish. Drop a soft puddle of sour cream into the centers of each baked cupcake and then drop 1/2 teaspoon jam in the center of the sour cream. Return to the oven and bake 5 minutes longer.
Cool the cupcakes completely before storing in the refrigerator.