That glut of food down the hill, or the fenced patch of weeds and trailing vines formerly known as “the garden,” is making me more magnanimous than usual. I’m chucking vegetables into pots, stripping kale from its stems at warp speed and lopping off way too much good stuff when I cut up a tomato, just to get through them. But I’m telling you, I want to get these vegetables taken care of, and they just keep coming, Strega Nonna-style.

My eggplants are glorious. Check it out. Scads of shiny baby eggplants, weighing down the stalks like iron lanterns.

Store-bought eggplant do not compare to fresh eggplant. They’re silkier, paler and when cooked slow and low, they will melt in your mouth. The only problem with growing them is that they come all at once. I’ve been throwing them on the stovetop to smoke and wither down every chance I get, and I even froze a bunch of them for making babghanous, the smoky eggplant and homemade mayo dip that I adore.

But the other day I peeled back the burnt skins and pureed the smoked eggplant, pumped it up with farm eggs and a pretty healthy pour of heavy cream and slowly baked the custard. I wouldn’t bake it uncovered again, strictly for visual reasons, as the skin it formed on top was an unappealing leatherish army green, but still, the custard was delicious in small doses and carried a great deal of smoky eggplant flavor through. (My thought: it might be better as a sformato: baked in individual cups in a water bath. Next time.) 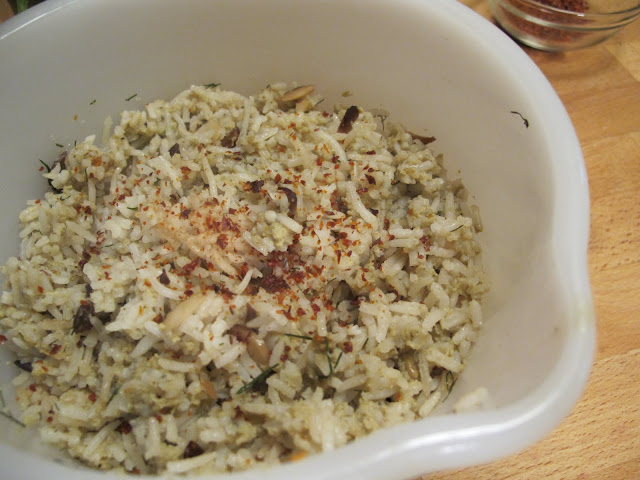 Tonight I took the leftover eggplant custard and mixed it into a batch of steamed basmati rice with dill and toasted almonds and found myself stumbling onto something pretty great. Smoked eggplant dirty rice? Oh my god. And it’s vegetarian. No matter which way you lean on the protein spectrum, this stuff rocks. But the next time I may forgo making the custard; I’ll just add the crushed smoked eggplant to the sauteed onions and almonds, add the rice, bury a cinnamon stick and a few bay leaves in it, and steam.  (Sorry, there’s no recipe. It was pure improvisation.)

But my absolute favorite way to make eggplant comes from this little Uzbekistani restaurant on Brighton Beach Boulevard in Brooklyn. We stumbled up from the beach one day, our noses leading us to this restaurant whose windows, open to the street, were exhaling great puffs of smoke. My gut identified it as pork. Inside, two guys were spinning shaskliks (kabobs: some pork, some lamb rib, some ground lamb) over chunks of charcoal as if caught in a hot game of foosball. We ordered a couple of those, and they fully lived up to the smoky hype drifting out onto the street, but the revelation of the day was the eggplant and tomato “salad,” a dish of shining cubes of purple eggplant, some tomato and a few spent petals of onion. The entire thing had been cooked into submission, and in an ungodly amount of olive oil, too.

But that day I discovered something: I hadn’t been cooking my eggplant near long enough. And another thing: if you cook the eggplant in its skin for a long time in olive oil, like a French confit, it comes out as soft and luscious (and nearly as sweet) as a marshmallow. I kid you not. So this is my rendition of the Uzbek eggplant-tomato, studded with cinnamon and bay, honey and plenty of olive oil. In our house it goes by the feckless name “eggplant stuff,” but we think of it with great reverence.

Tomato and eggplant confit
1 pound eggplant, preferably a small variety
1/2 large onion
2 beefsteak tomatoes,
3 garlic cloves, peeled and thinly sliced
2 bay leaves
1 teaspoon honey
1/2 cinnamon stick
juice of 1/2 lemon
1/2 cup canola oil, divided
1/4 extra-virgin olive oil, divided
1/2 teaspoon salt
10 turns black pepper
Heat half of the canola oil in a large sauté pan over medium-high heat. Add one-third of the eggplant and fry until dark golden. Remove to a paper-towel lined plate and repeat with the remaining eggplant, adding the rest of the canola oil as needed.
Blot the eggplant  well and season with a little salt.
Peel the tomatoes: stick a fork in the center of the tomato and hold it over the gas flame until the skin pops, rotating the tomato. Peel the skin and cut the tomatoes into chunks.
Heat the 2 Tablespoons of olive oil in the pan and add the onion. Cook over medium-high heat until darkened around the edges. Add the garlic and cook for another two minutes.
Add the tomatoes, cinnamon stick, bay leaves, honey, salt and the rest of the olive oil. Shake the pan and don’t really stir; turn the vegetables over very gently to combine. Turn the heat to low. Cover the pan and cook over low heat until the eggplant is soft and there’s liquid in the pan, about 20 minutes. Uncover the pan and cook over low heat until the thick liquid clings to the vegetables, about 15 minutes. Turn out into a shallow bowl and serve hot, warm or at room temperature.