This is the second year we’ve hosted deer camp at our house, and by now I’ve learned that my preconceptions about it were all wrong.
The fraternity is high, but that’s not the entire point. There is some drinking and stogey-smoking, but not an unreasonable amount. There is spirited conversation, but everyone wants to hit the pillow early, to stem the pain of the predawn rise. At deer camp, coffee is king, no one is cavalier, guns are handled like newborns, and everyone looks forward to the prize with mixed emotions.
This year our party brought down two does on the first day. That night we feasted on the venison terrine I made with meat that a friend got during bow-season, more or less following a recipe from Charcuterie, by Michael Ruhlman and Brian Polcyn. I wanted a more rustic-feeling pate, so I kept the mixture coarser than they described. With some Dijon and my pickled plums, it tasted earthy but tame. Its surprising mellowness set the mood.

The guys brought in the liver (enormous, the color of espresso) and what was left of the heart (as Darrin, with real bravado, pierced this doe through the heart from a distance of 300 yards), and the tenderloins. I rolled those in a mixture of toasted ground coriander seed, clove and black pepper and then sautéed and butter-basted them to medium-rare—magenta on the inside, molasses-brown on the outside. They were deliciously metallic and woodsy at the same time.
The next day, we dealt with the two does hanging from the wood shed trestle. Darrin left the yuck—the innards—back in the field, and after hanging eight hours in the high-30’s degree night air, they were thoroughly chilled. My husband Aaron found the beauty in this: 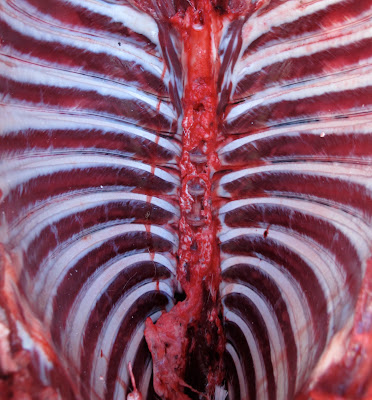 And Darrin and his brother Todd got to work taking off the hides. 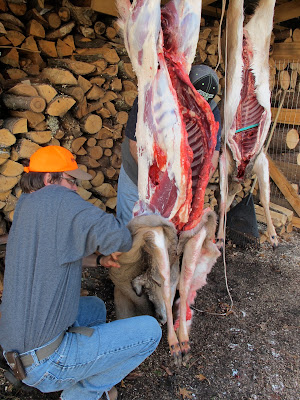 Their other brother Brian and I set up the cutting boards and started trimming meat as quickly as they could throw it our way. Actually, we soon fell far behind them. Removing every scrap of silverskin and fat is putzy work, and you have to  remove all of the pungent tallow and every thread of gristle if you want really clean-tasting meat. 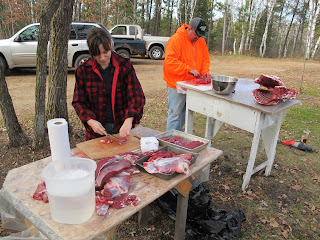 Many paper towels were used, and we had a bucket of light suds with a drop of bleach. For a front-yard operation, our scrupulousness bordered on the nerdy.

A few hours later, as the sun slipped in the sky and we started to feel a cold charge in the air, we brought the full tubs of meat inside to begin the business of grinding, wrapping and cryovacking. 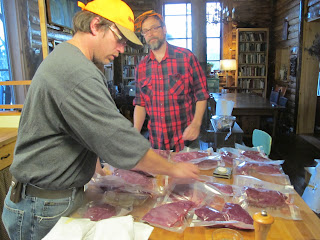 Finally, we stood around the table of packages in a ceremony known as the Great Divide. Who gets what? Who wants to haul it? And whose wife eats venison?
This one does. (I hear of many who do not.) I took a few roasts, sifting through for haunch, the tenderloin from the smaller doe and a few pounds of ground.

How to Butcher a Pig in Your Front Yard ›