I’m still backpedalling, and I promise not to dump on this blog the veritable avalanche of ideas that I’ve been filing into the “blog” folder for the past six months as I worked up the nerve (and technological prowess) to start one. (Who has trouble with a blog on Blogger? Uh, I do. I spent the formative years of the blogosphere, from 2000 to 2006, with my head down, working like a dog in kitchens, rarely getting on a computer. I use that as my excuse.)

So just this once. I can’t resist posting a photo of the baby, Hank. This was his first birthday. I guessed correctly that he’d appreciate an Ernie cake, because he had at the time forged an on-again/off-again relationship with a small Ernie doll. We figured that he liked Ernie’s scratchy tuft of unruly hair. 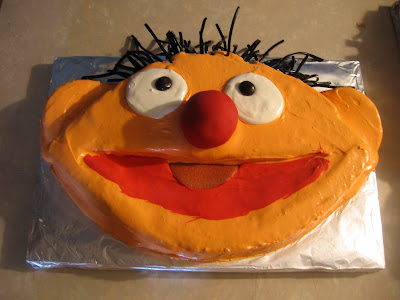 Recognizing the hair as key to the Ernie cake, I dragged my in-laws through all the puddles of one of those soaking, windy New York days, from Park Slope to Tribeca, in search of thin licorice whips to stick in Ernie’s crown. (I also found that dried guava, when cut into a half-moon, makes a perfect Ernie tongue. And about a half a bottle of red food-safe gel went into Ernie’s radioactive cherry-colored marzipan nose.) I was uncompromising and I’m sure it was irritating to all involved, but when it was done, Hank turned to me and said, “Unhhh!” with all the enthusiasm of first recognition.

From foie gras to Fluff. (Marshmallow fluff, that is, which I mixed with soft butter for the sickeningly sweet baby’s buttercream … ). This is what I’ve become. But if I had to work so hard cooking professionally for that many years to get to the point where I could whip up a bright and convincing cake for the baby’s birthday the morning before the party, I guess it was all worth it.

‹ All the dinner parties of August, and there were many . . .