No matter where you live, you never escape the unbidden conversation, the moment when a stranger who simply needs to verbalize will strike up a flare of talk with you. Whether you’re in the streets of Brooklyn or a small town grocery store aisle, the upstart talker is a universal character. Here in my peaceable hometown—where I think of myself as less of an anonymous bystander and more as a character in an ongoing play—I’m much more inclined to join in the game.

So I found myself the other day answering an elderly lady’s open comment as we stood over the lemons together at the grocery store. She, professing her love for fresh lemonade but lamenting the cost: “lemons are so high.” Me, agreeing with her because homemade lemonade leaves all the rest in the dust, and I too wished it didn’t cost $10 a pitcher to make.

Often I mix the fresh lemon juice with other cheaper juices, such as orange, to stretch it out. But the other day I found a Mexican market in a nearby town which sold bags of “Flor de Jamaica,” the deep red purplish dried flowers of hibiscus. I’ve had sorrel drinks at Jamaican restaurants in Brooklyn made from these flowers and remembered loving the naturally tart, fruity juice. And at $2.99 per bag, this kind of lemonade was going to cost less than a dollar per pitcher. 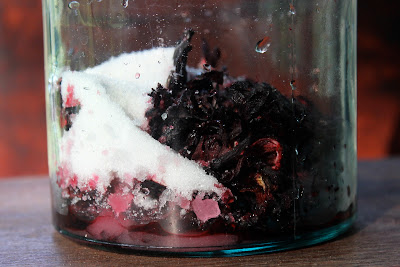 And it couldn’t be easier to make. I scooped out some hibiscus petals, gave them a quick rinse, and threw them in the bottom of a clean 2-quart jar. I then added a fat round of peeled ginger root and a handful of sugar. It looked so beautiful at this point, like the first snow’s flowers zapped with frost.

I poured boiled water over this mixture to cover, let it stand until cool, strained out the solids, filled up the jar with cold water and put it in the refrigerator to chill completely.

The finished hibiscus lemonade had the lingering energy of ginger and a refreshing sour sting from the hibiscus. Spiking each glass with a squeeze of lime makes this drink so perfect that I’ve been making a fresh batch every day or two. It’s also just so nice to have a jug of this ruby cooler on hand, this frugal lemonade with the inner magenta light.

Rinse the hibiscus and put it, along with the sugar and the ginger, in the bottom of a 2-quart glass jar or a large pitcher. Pour in boiling water to cover and leave to steep until cool. Dredge or strain out the flowers and ginger.
Add water to fill up the 2-quart jar, cap, and store in the refrigerator until cold. Serve the drink over ice, with a fresh wedge of lime.