If you combine the bar festivals with the grocery store mini-restaurants, block parties, wild game feeds, and spaghetti suppers, and if you include all the other benefits and feeds held at various service organizations and churches in all of these little towns, you could probably say that rural Minnesota puts on more pop-up dinners in a given month than those given in New York, Los Angeles and all urban points in between. And the annual lutefisk dinner is the king of all pop-ups.

This year I took in a good one. You can see from the sign below that this supper took place a couple of months ago at a Lutheran church in Bemidji, MN, a town 60 miles north of me. I was reminded of it once again during my husband’s family’s Christmas dinner as the lutefisk platter swept past me—once, twice, three times.
I eat lutefisk out of occupational curiosity. After sampling it at least six or seven times I think I can say with some authority that it is just not good stuff. Many ethnic Scandinavian Minnesotans pretend to enjoy it, but you also might notice that they are usually the biggest bullslingers in the bunch, and those with the driest of humors. I add my voice to a chorus when I say that lutefisk is truly terrible.
First the cod is preserved in a lye solution. A week or two before serving, the cod must be soaked in fresh water each day for a week to leach out the excess, leaving the now-translucent fish plenty waterlogged. Then it is steamed or boiled until the edges soften into a watery jello. In my experience, no matter how it’s cooked the center remains tough and stringy—to hold the chunk together, I suppose. Nobody ever salts it, though it cries out for something in the way of curing or seasoning. It does receive a gloss of melted butter on the plate, but in my opinion this balm comes way too late. Lutefisk eating is more cultural reenactment than anything else.
Nevertheless, we went to this supper. We were drawn in partly by their lovely graphics, and also by the promise of meatballs.  After writing out our check and getting our tickets the staff ushered us to the church to await our turn. They told us they’d call our numbers when sufficient room opened in the dining room downstairs. 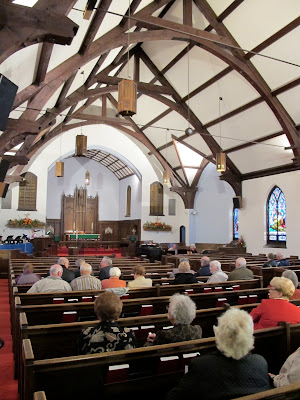 My husband and our very hungry four-year-old took a pew behind about 60 waiting people. Near the altar a pianist and soloist entertained the crowd with an eclectic mix: an overly enunciated “Feelin’ Groovy” slid right into a rousing rendition of “God Bless America.” They played a peppy Beatles tune from the Sgt. Pepper’s era. A woman in tip-to-top Norwegian regalia interrupted the song to call out the numbers: “361, 62, 63, and 64. And then I have two more spots …  but they’re not together. Any takers? No, Ooo-kay. I’ll go down and see what I can do.” 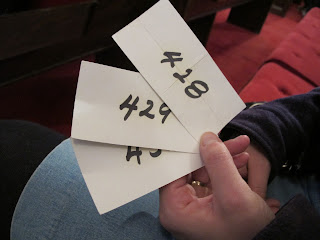 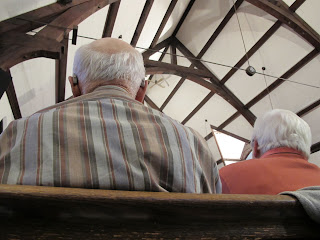 As we waited the church filled with more and more people. 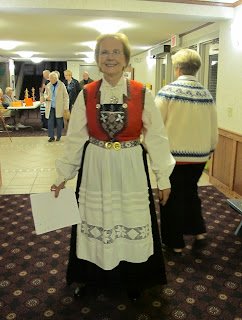 The beautiful lady kept seeing what she could do, but after nearly an hour of this our kid wormed his way out of the pew and crawled onto the ruby carpeted landing, where he begun to dissolve. I got up and explained our case to the lady, who pulled some strings. They sat us at a table with the pastor of the church and his wife, both of whom were great conversationalists. 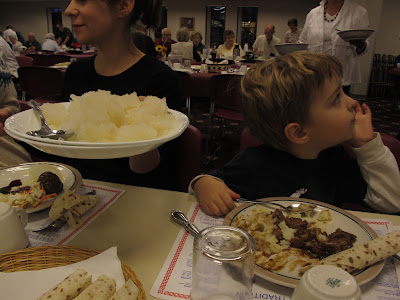 Seated, we passed everything around family style. Here’s the lutefisk.
I was surprised by how delicious the dinner was. The rutabagas were boiled and mashed with cream, butter, salt and pepper. And really, the flavor of rutabagas is thick like a chord. They need nothing else.The lefse was as tender as a fresh flour tortilla and pocked from contact with the grill. The coleslaw did not come from a bag but was instead freshly shredded. The meatballs were good, the gravy was not too bad. And the lutefisk, well, I had a decent chunk and the melted butter was flowing. 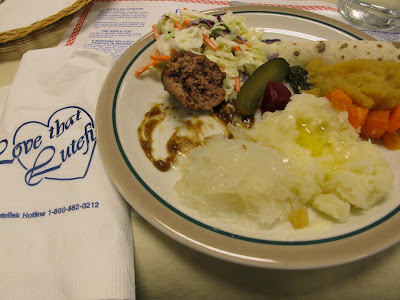 I zoomed up on this group at the table next next to ours. Their plates are properly blanched: just potatoes, lutefisk, lefse and butter. Here you have photographic evidence showing the importance of the butter to a Norwegian holiday dinner. The guy in the background is opening his lefse to butter it before rolling it back up, and the guy in the foreground is pouring the melted butter over every hill on his plate. 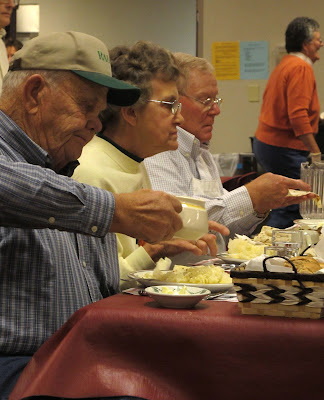 Lick your fork, there’s pie. Mine missed the mark, but I blame that on bad luck. I was away from the table when the pie cart arrived, so someone stuck me with a loser, a dense slice of apple crumb. Otherwise I would have picked the homemade pumpkin for sure. 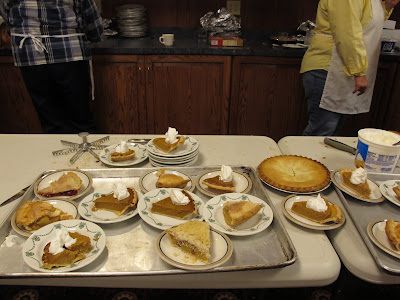