Our hot summer weather has done a good job of incubating the potatoes. Around this time I usually start digging around the potato plants to see if I can rob the cradle for the babies; I was surprised this morning to find them already nearly fully grown. 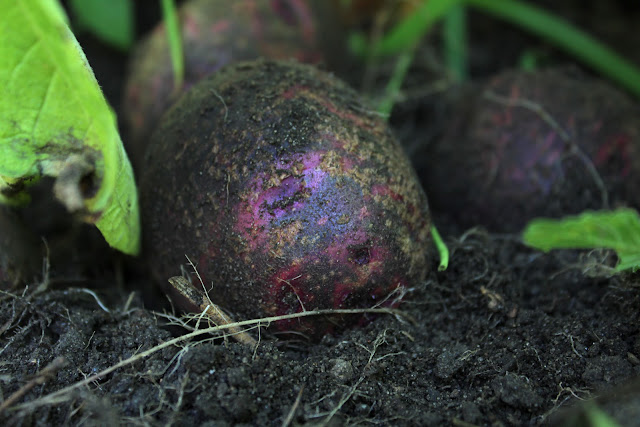 I may have missed out on the baby potatoes, but I do still have the privilege to send these purple beauties straight from the cover of black soil to the plate, so that they retain that waxy texture particular to the freshly dug. This new potato obsession is an important thing among gardeners and old-timers, but most people these days erroneously equate “new potatoes” with what they find in the stores under that label, the “b” size baby reds. Those are the right size, but size isn’t what makes them desirable: rather, it’s their freshness, the short window of time they’ve spent out of the ground, that makes them “new.” You want to catch them during that slim interval when their flesh is the texture of alpine cheese and their skins are as thin as tissue paper. The Scandinavians and Germans know what I’m talking about: they race their potatoes from the garden to the kitchen in much the same way that Americans have always dispatched field corn to the pot—with a real sense of urgency.
This morning after I drained my second cup of coffee my forgotten breakfast was beginning to ping loudly in my hollow core, and I knew I needed something substantial. I pushed back the computer, wedged by feet into my squashed gardening shoes and set out for the potato beds. They were more than ready. Minutes later, with such potatoes in my hands I couldn’t help but think a potato salad from one of my favorite Ernest Hemingway books, his non-fictional A Moveable Feast, the one about his life as a young writer in Paris. The stories are about hunger—more for accomplishment than for food I think—but there is also plenty of French food and drink in it, bistro fare mostly, and many tall beers. Throughout the book he accords little description to the food, yet in that maddening Hemingway-way makes all of it seem to hover in the air at close range, merely sketched out yet somehow fully rendered, and always highly aromatic. Here, at Lipp’s Brasserie, the fat slices of potato slide among each other like a pile of well-oiled poker chips: “The pommes a l’huile were firm and marinated and the olive oil delicious. I ground black pepper over the potatoes and moistened the bread in the olive oil. After the first heavy draft of beer I drank and ate very slowly. When the pommes a l’huile were gone I ordered another serving and a cervelas.”
Often when I shoot for pure minimalism—whether in food or in writing—I fail at it, and today was no different. I just couldn’t resist adding a few handfuls of purslane, Portulaca oleracea, which were stretching out in low-lying webs nearby. With their plump oval pods of sour, puckering liquid, they have a flavor not unlike sorrel leaves but a snappier texture, and I thought they’d give the vinegary dressing nice echo. Before noon the purslane is still flowering, and I pulled it out right after I took this shot. Later on in the day the flowers disappear, like Morning Glories. 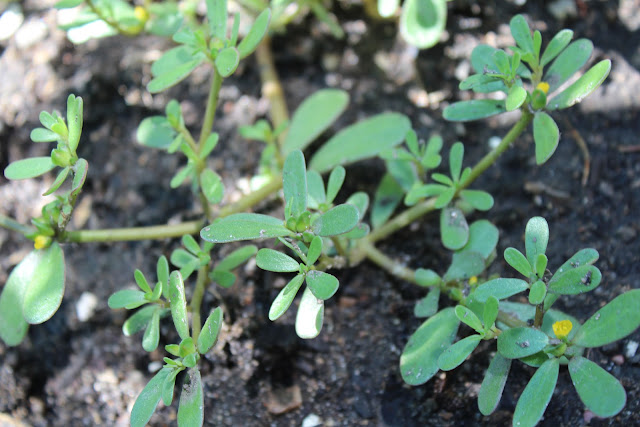 Here’s a recipe, although you hardly need one. The thing to remember is to forget about using a spoon to mix; new potatoes are fragile and break easily. Imagine yourself instead a French waiter in the bistro kitchen, flipping the potatoes in a wide bowl to apply a fresh gloss of oil before shaking them out onto the plate.

If you don’t have purslane invading your garden beds, as I do, you might be able to find it at a farmer’s market. Or you can substitute arugula.

Put the potatoes in a large, heavy sauce pot and fill with water to cover. Bring to a simmer and season the water heavily with salt. Cook gently until the potatoes are just tender when poked in the center. Drain and let sit until cool enough to handle.
In a large bowl, combine the Dijon, vinegar, salt and pepper and whisk until smooth. Add the olive oil and mix to combine but don’t emulsify them together. Slice the warm potatoes over the dressing and flip the bowl to coat the potatoes. Add the purslane, flip again and pour out onto a serving platter. This salad is best eaten at room temperature; the potatoes lose some of their fleeting fresh texture after being refrigerated.