Foodwise, this is always a weird time—post-local potato, pre-local asparagus—and it’s strange to watch the collisions between the stodgy winter stockpile and the first tendrils of the season. Like today, coming back into the house with the first armful of baby bok choy from the greenhouse, I creaked open the door of the deep freeze on the porch and finally saw it, the official end of winter: the bottom of my deep freezer. Of the pig that I fabricated in the fall just one roast, two packs of chorizo and a boatload of pork belly remain.

No, more than one boat’s worth of pork belly. A fleet. I’m beginning to think I should have turned more of the belly into pancetta, because giving it a spring spin has been addling my brain. Honestly, it’s what’s left but it is not what I’m craving.

Then I remembered this hotpot, a recipe I saw in the thunderous Meat by Hugh Fearnley-Whittingstall. This book, from a great British chef who works on his farm in the country, is a near-biblical take on meat eating, mixing ethics and streak-of-lean in a 50-50 ratio,  and it is full of affecting photos that drape raw and cooked chunks of meat alike with heartbreaking beams of light … in short, it’s a book that makes your mouth whimper and water like only a collection of carnivorous recipes can. I loved Vegetarian Cooking for Everyone when it first came out as well, but I adore the book of meat. 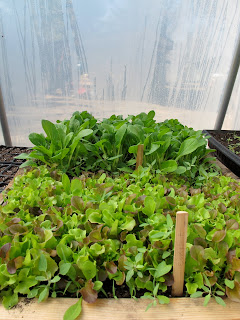 But thanks to our new greenhouse, it’s not all pork belly all the time. Now I can pad my fatty fauna with unseasonably early flora. Last fall we acquired a portable building, covered it with two layers of greenhouse plastic and backed it up next to a window of my husband’s studio building, the one that opens up next to his wood stove. The idea is that the heat from the stove heats the greenhouse and the moisture from the greenhouse humidifies the studio. It works splendidly, except when it’s 30 below zero. 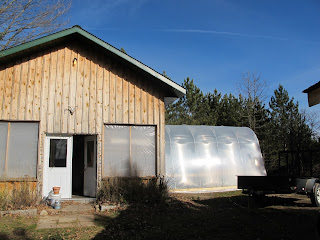 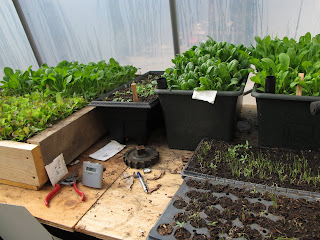 Inside, we have tubs of spinach and arugula on the right, a flat of bok choy and baby greens on the left, leeks and onions in the trays in front, and I guess a scattering of junk in the middle.
I have been shearing the tubs of spinach and arugula with a scissors but we needed to actually thin out the bok choy planting, and with those came all the dirty little roots, still thin and wispy. I swished the whole plants in a large bowl of water. After a couple of rinsings the roots washed clean, and I didn’t bother to trim off the whisker end.
True to his calling, Hugh of the meat book does not mar his Chinese Pork Belly Hotpot with any greenery—but like I said, I had loads of thinnings, so I dumped in a good clump and drowned them with broth.
The pork was almost pudding-soft, the noodles slippery, the greens mustardy, the broth simple and right. The freshly picked greens wilting in the hot broth felt like shocks of spring, like meat versus vegetable, matched to a fair fight. Even my husband crowed over the hotpot and he purports not to like “Asian soups.” I wouldn’t say he’s a picky guy, especially about food, but he has a few strong prejudices—against nuts, for instance. He’ll eat toasted or glazed nuts in a salad but if he cracks into a walnut inside a brownie his jaw will freeze and he will expel it into a napkin as if it were a bite full of rot.  (His explanation—“I just don’t like cold, wet nuts”—is a tough one to argue against.)
The Asian soup thing is a little more mysterious, but I would bet it has to do with the downtrodden condition of the floors in the divey pho places that I frequent. I suspect that this cruddy visual coupled with the unexpected earthy smell of soy- and fish sauce-spiked pork broth come together to form a sense memory that repels him.
But not this time. Here we have fresh broth, distilled from an Amish pork belly, and bok choy sproutlings which, in this climate, are akin to miracle babies.
Chinese Pork Belly Hot Pot with Baby Bok Choy
adapted (pretty much) from Meat, by Hugh Fearnley-Whittingstall
2 pounds meaty fresh pork belly (unsmoked)
2 Tablespoons shaoxing wine (substitute sherry)
2 Tablespoons soy sauce
4-inch piece fresh ginger, peeled and sliced into thick rounds
3 small red dried chilies
1 star anise
2 teaspoons rice wine vinegar or chinese chinkiang vinegar
pinch of salt
pinch of sugar
7 ounces (1/2 package) rice noodles
2 large handfuls baby bok choy
4 scallions, thinly sliced
Cut the pork belly into 1-inch thick slabs, then cut each slab into two-inch thick pieces, sort of rectangular. I trimmed the top 1/2-inch of fat or so in places where there was absolutely no meat in sight. Don’t worry if the belly seems really fatty; much of that will cook into the broth and you will skim it off later. (And the rest you will sip, and love.)
Put the pork belly in a 3-quart pot and cover with water by one inch. Bring to a boil and then drain, discarding water. Wash and rinse the pot and add the pork back in. Cover again with fresh water by one inch. Add the shaoxing wine, soy sauce, ginger, chilies, star anise, vinegar, pinch of salt and pinch of sugar. Bring to a simmer and cook, uncovered, until the pork is very tender, about 2 to 2 1/2 hours.
As it cooks, soak the rice noodles in cold water to cover. Heat a small pot of water for cooking the noodles.
When the pork is tender, drain, pouring the broth into a large bowl. With a ladle, skim the fat from the surface of the broth: touch the round bottom of the ladle to the center of the broth and then begin to make concentric circles, swirling, until you’ve created a little whirling gyre. Dip the top of the ladle into the swirling broth, working outward, scooping up the fat at the top of the broth. This sounds hard, but it’s very easy, a natural motion. Don’t worry about removing every droplet of fat though.
Discard the chopped ginger, chilies and star anise and add the pork back to the broth. Season the broth with more soy, shaoxing and salt to taste. Bring to a simmer to reheat. Meanwhile, cook the noodles in boiling salted water for about 3 minutes, or until chewy tender. Drain and add to your bowl. Add the baby bok choy and scallions to the hotpot, swirl together, and ladle over the noodles. Serve immediately.