The currants have returned.
Around the 1950’s there began a widespread removal of both the wild and cultivated berries of the Ribes species—black, red and champagne currants, and gooseberries—because they were found to cause White Pine Blister Rust, a disease that kills the slow-growing white pines, the eventual giants of a mixed coniferous forest.
Back when we first lived out here, circa 1997, I wanted to plant a fleet of red and black currant bushes so that I could make my own cassis from the black currants, and summer pudding from the red ones. We quickly learned that they were banned, due to the blister rust. By the time we’d moved back here for good, four years ago, the ban had been lifted: it seems that planting white pines bred to have natural resistance to the blister rust was doing a better job of eradication than pulling up the Ribes. We laid in a plot of black currants right away. My neighbors to the south, Kent Sheer and Vicki Cherpulis, began planting a forest of currants at their farm in Wadena, Green Island.
Lucky me, I had the chance to pick their red currant bushes this year, which were sufficiently loaded enough to allow a few experiments.
These days they’re an uncommon berry, but you don’t have to look very far back into recipe books to find mention of red currants. The German and Scandinavian immigrants brought with them tons of recipes for their beloved red fruits: Red currant pies, mixed red berry puddings, compotes for ice cream, and on and on. Loaded with natural pectin, pure red currant juice practically turns itself into jelly with a little cooking. And what a jelly, setting into a deep red glass, glowing eerily from within. It was so textbook perfect it reminded me of the old dime-store candies: the juice tastes unfamiliar, something like a cross between raspberry and strawberry, but then … maybe it tastes more like red, in the same way that purple candies don’t taste like grape, but more like purple.
The jelly is great, but it doesn’t mix so well into yogurt, which is my little habit. I messed around with more of the painstakingly cleaned berries (prepping these babies will leave you with sticky fingers and a stubbornly nearsighted range of vision) and figured out a soft compote that leaves the berries virtually untouched. Left whole, they pop in the mouth like caviar. 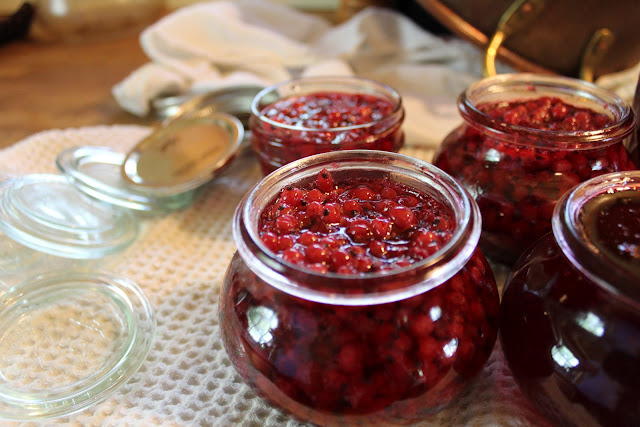 Well, that is, caviar with seeds. There’s a town in France known for a lovely version of this currant compote made with seeded currants, each center nib skillfully poked out with the eye of a needle, but for me that’s a bit like peeling grapes—unnecessary, bah, more appropriate for the slower eras.I neglected to pit my berries, and when we spooned the jeweled compote over ice cream, the seeds were no more bother than the seeds in raspberries—or possibly less, because there were fewer of them. My husband’s grandmother, now 92 years young, didn’t have a problem with them. A good Norwegian, I think she appreciated the revival of this particular red flavor. We sat on the porch, pretty quietly, all of us smitten by the sight of bright berry syrup making a river run through the cream.
Red Currant Compote

To clean the currants, strip them from their stems, cover with lots of cold water and skim the bits that float to the surface. Drain.
Combine the sugar and water in a wide sauce pot and bring to a simmer, cooking until the sugar is dissolved. Add the currants, return to a simmer, and cook 1 minute. Drain the currants, saving the juice, and return the juice to the pot. Add the lemon juice. Boil the juice until a droplet feels sticky when pinched between your fingers, or until it reaches about 225 degrees. Add the berries and return the mixture to a boil. Ladle the compote into sterilized half-pint jars, top with lids and bands and either refrigerate or freeze. If you’d like to preserve it, process the jars 10 minutes in a boiling water bath.