…are the most phenomenal wild mushrooms that I’ve eaten here. We don’t have chanterelles or porcinis, but we have morels and we have Shaggy Manes, which have a stronger, more seductive fragrance than morels, the strength of a truffle and the texture of oyster mushrooms. Really.

I spotted them in the ditch as we were driving and even at 55 miles an hour their pure-white, rounded protruding tops caught my eye.

(By the way, spotting mushrooms isn’t about scanning the ground for a certain color or shape. I’ve come to think that it’s about attuning your eye to spot moisture, something succulent—and possibly edible—on the forest floor. If you think about moisture, you will be able to scan over all the dry leaves and needles until you spot moist lichens, then patches of bare ground, and finally, mushrooms.)

Shaggy manes rise up and disintegrate with astonishing speed. I swear I could have watched them pop from the ground if I’d had the time. Here’s a link to an amazing time lapse video of just that phenomenon.

(This from Cornell’s Mushroom Blog. I think I’ve found a new favorite website.)

Once picked, they begin to dissolve, edges first, into black goo. The youngest, tightest mushrooms fared the best and lasted a full day. They are the most fragile mushrooms I’ve ever worked with, and now I know why they’re not more widely known. Shaggy manes are private treasures. If you find them, pick them and eat them immediately. In these, nature gives us a direct, gluttonous order that we ought not to ignore.

Cleaning them was amusing. They were pretty clean underneath, so I figured I just needed to brush off the surface dirt and give them a quick rinse. I used a vegetable brush, working gently from top to bottom until they were sleek, clean and comb-marked. I was combing their shaggy manes! This cracked me up, so I took a picture: 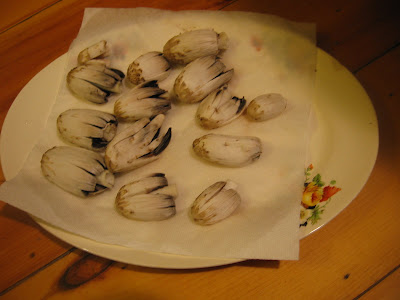 Then I sliced them in half, heated some butter in my cast-iron pan until it started to brown, added 1 minced clove of garlic and some minced fresh rosemary and then the mushrooms. I cooked them at high heat until the liquid began to reduce, then deglazed with a couple of tablespoons of chicken stock and a tablespoon of marsala wine. I let that boil a bit, then swirled in a pat of butter.

We ate the shaggy mane ragout with some of the wild rice that Aaron harvested from the creek (our first meal from the new batch of freshly parched rice …) and a quick stir-fry of garden zucchini and tomato. Aaron started a fire and we sat by the wood stove and consumed a simple, but absolutely perfect, tribute to the last week of September in northern Minnesota. This meal hit us, in the best possible way, right in the gut—and I don’t think it was the wine which, although it came from the local over-priced liquor store, was surprisingly alright.