Shell Beans, Back Around

I hate to inject unease into my food blog (as these are supposed to be cheery) but the last couple of weeks have thrummed with odd notes. My little guy got sick, enough to scare the lights out of his mother, then a coastline of people were wiped out in Japan and that area of the world threatened with nuclear fallout (which, of course, everyone knows about) and then there’s the dangerous matter of the March thaw here on the hill: Yesterday in my very own driveway I literally skated around the car from my kid’s car door to the driver’s door, clinging to the window strips for balance, when suddenly the butt of the car slid backward about six feet, wheels swinging toward the hillside. It stopped at the foot of a Norway pine and I jumped into the front seat screaming, at once terrifying the kid in the backseat and testing my husband’s threshold for driveway drama. (“It would have stopped you know!”) He’s right: the car slide was no big thing, but I immediately read it as a symbol of the general unsteadiness.

So naturally, as someone who likes to cook does in times like these, I scrubbed my counters and cleared the kitchen windowsills of clutter and started just making something, anything, to get back to the baseline.

I wanted something as comforting to make as it is to eat, so I improvised a new burnt sugar pudding. Remembering how pastry chefs always risked bitterness when caramelizing white sugar to the point of no-going-back, lost-in-the-dark, almost-burnt amber for caramel ice cream base, I dumped a cup of sugar in a pot and cranked the heat. I didn’t take my eyes from it or stop stirring until all the dairy was in and I had a burbling mudpie of burnt sugar pudding, tasting just like the best of those dark caramel ice creams—like toasted marshmallows and just-roasted coffee beans—and looking as tan and healthy as doeskin.

I have no photo for this, nor a recipe ready to post. In fact, no one here even ate any of it.

Well, I should say: I had a spoonful of the delicious mush in a teacup, swirled with another spoonful of whole milk yogurt, which in my world constitutes “being on a diet” and doesn’t even count. My ailing three-year-old, the pudding’s intended, took a pass because it did not look like mac and cheese. It hit the back reaches of the fridge on its first toss, but it was still a comfort for me to make it.

Things returned to a more normal volume after a long chit-chat with my sister-in-law.

It’s a very long story, but my husband’s sister and I have been close friends since we were ten—and we don’t know, probably before. A few years ago I found a photo of her fourth birthday party in her parents’ junk drawer and there was the four-year-old me in it, sitting in pigtails and a party dress, shoving down cake. We are sisters.

Anyway, this is to say that she and I are the aunts who call each other almost every day and have conversations in semi-conscious states of being. We puddle-jump from one hot daily to the next before invariably landing on the hottest topic of all: What We Are Making For Dinner Tonight. When she superimposed my craving by saying, “Gosh, I am kind of hungry for beans … you know?” I knew that she’d voiced the perfect balm. We’ve contemplated each others’ chickpea cravings, yens for black beans and baked bean impulses before, and they’ve always turned out as well or better than expected. Beans in general, I’ve found, pull through. They’re good performers.

And the shell beans from last years’ garden, which I picked, cryovacked and froze sometime last August, are no exception. If you know shell beans you probably love them. But for those who aren’t acquainted, shell beans (or “shellies” as they’re affectionately known) are simply the mature beans that you shell out before they’ve had a chance to dry in the pods. In markets they’re usually sold in their pink and white pods as “fresh cranberry beans.” You can steal from any dried bean to make a shell bean, but for some reason commercial growers usually use cranberry beans. When shelled, they look plump and iridescent, like opals. They take just forty minutes to cook to full tenderness, never split apart, and have seemingly invisible skins that seem to disappear in your mouth. The insides are thick and creamy, almost like fudge. I love them so much that I picked all I could last summer and froze them in little bags, hoping they would emerge from their thaw with the same attributes. Which, luckily, they did. 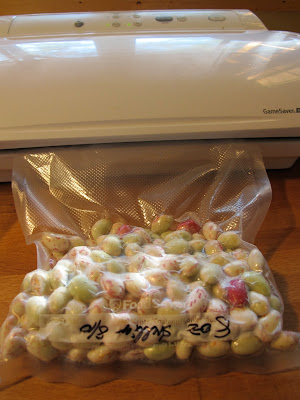 I dumped two of those bags in a pot, covered them with water and started simmering, vaguely thinking of soup. To add a little fiber to this starch fantasy I threw in handfuls of vegetables: green beans, cubes of cabbage, edamame. And of course chunks of ham, because I usually have some around. To thicken the broth I smashed a few spoonfuls of beans against the side of the pot and then swished in a cup of grated parmesan as I took it off the stove.

In the end I ended up with a sort of garbure, or the famous stewed hodgepode of beans and cabbage and (traditionally) duck or goose from Southwest France. Mine exhibited a strong springtime lilt, a keening toward warmer weather, green hills and bluer skies. 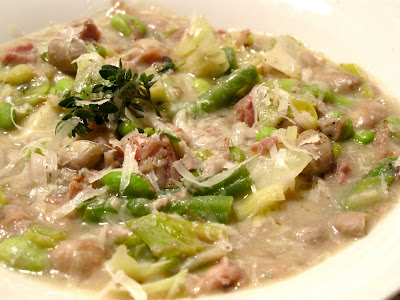 Combine the beans, 1/2 teaspoon salt, water and bay leaves in a 2-quart saucepot. Bring to a simmer and cook until the beans are tender, about 40 minutes. (If using a dried bean you will need to cook another hour or so. Add water as needed.) The cooking liquid should be about level with the beans. Add a little more water to just cover the tops.
Cut the cabbage into bite-sized squares. Halve the leek lengthwise, cut off the top 3 inches or so and strip off the flimsy outer layer. Run water in between the leaves to remove any grit. Slice the leek lengthwise again and then dice into bite-sized pieces.
Add the ham, cabbage, green beans, leek, chopped thyme and remaining salt to the bean mixture. Bring to a simmer and cook about 10 minutes. Add the edamame and cook another 10-15 minutes, or until the vegetables are tender. Taste for salt. Depending on the sort of ham used, you may or may not need any more.
Smash spoonfuls of the bean mixture against the side of the pot to thicken the broth. Season with freshly ground black pepper. Stir in the extra-virgin olive oil and then, off the heat, most of the parmesan cheese. Save a little to garnish the tops of the bowls. Serve immediately.

‹ An Amish Dinner with Apple Tart