From my mother I learned not to panic when the Minnesota summer explodes into a rare heatwave the very day that you have ten people coming for dinner. Do not even turn on the lights in the kitchen. No, just calmly get out the extension cord and leash it to a crockpot sitting outside. As hers did, my hot-weather crockpot usually contains a chunk of chuck roast which, after 8 hours, will slowly melt at the edges like an iceberg in a warming sea.

Her famous summer shredded beef swam in a shimmering copper bouillon that took both its color and potency from a packet of Lipton’s Onion Soup Mix—and don’t knock it, either. The low, sweet scent of dark onion burrowing into the unraveling beef stands tall in my childhood memory, lords it over the space of time like good pipe smoke.

But I can no longer stand the dry husk sound, that rattlesnake shake, of the seasoning packet, and over the years I’ve somehow lost my taste for it as well. Kids seem to like the high drama of salt and faux-flavor, but now my palate craves the floral notes of freshly crushed spices, the warmth of real onions. For authenticity, I try to maintain the perfect consistency of my mother’s shredded beef, and make sure it’s juicy enough to soak its bleached white bun all the way through to the plate. A properly made summer shredded beef requires a dimpled paper napkin.

Because my brother Bob—the Mexican-food-lover—was coming, I made barbacoa, or pulled beef with chiles. The marinade for the beef began in a bold way, with a hank of dried chiles and a handful of spices, but after eight hours of slow cooking it mellowed to a rusty sauce—tasty but benevolent. Bob, and he’s an expert, said it was correct: barbacoa isn’t necessarily spicy. (Good, because we had kids to feed.) But he needed hot salsa.

So for his portion I chopped up the first of my ripe roma tomatoes, a garden onion, the straggly ends of cilantro, a handful of basil and two full serranos, and hit it all with lime and salt.

In the end we had something much kickier than our mom’s shredded beef. But the hard roll—its top skin crackled like an old map, one of the few breads that the local grocery store bakery still makes so right—brought it all home for us. 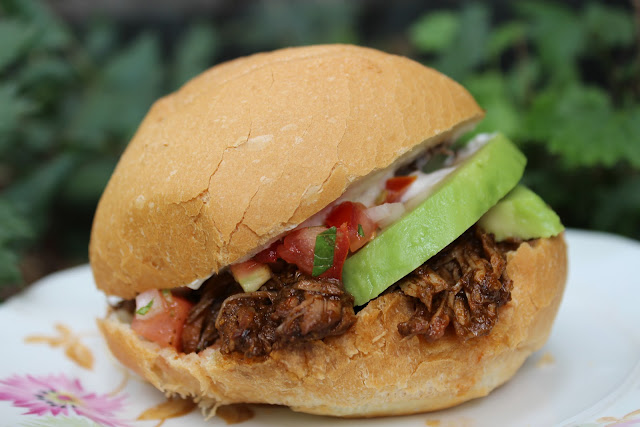 This recipe will serve at least 12.

Pour boiling water to cover over the dried chiles and steep until cool enough to tough. Remove the stems and pinch out some of the seeds, and reserve the liquid.

In a dry blender, combine the allspice, cloves and cumin seed and process on high, until finely ground. Add the soaked chiles (including the chipotles, in whatever form), garlic cloves, onion, salt, oregano and apple cider vinegar. Process on high until smoothly pureed, adding some of the soaking liquid if necessary.

Place the beef in the crockpot container, add the seasoning paste and, if you have time, leave to marinate for at least 8 hours before cooking. Add the cinnamon stick and 1 cup of reserved chile-soaking water, cover tightly, and cook the beef on high for 1 hour, and then on low for another 6 to 7 hours, or until the feels tender when poked with a fork. (I do this overnight.) Remove the beef to a plate, skim the top of the liquid to remove the excess fat, and return the meat to the pot, shredding it roughly into the sauce. Season to taste with more salt and vinegar, if necessary.

Serve the beef on crusty rolls, with slices of avocado, fresh spicy salsa and crema, or sour cream seasoned with lime juice, salt and pepper.

The Tour of Beef ›