Extreme frugality, coupled with a real respect for industrial food, has led us to this cultural cul-de-sac: here in the rural Midwest, we like to make our own candy bars.

As city people are dropping cash to replicate the cucina povera dishes of Tuscan grandmothers (such as panzanella—stale bread salad—and spaghetti cacio e pepe—pasta with pecorino), out in the Midwestern countryside we make replicas of store-bought treats: bar cookies that taste just like a snickers bar or, even better, a mars bar; sticky cakes meant to summon up taste memories of heath bars; our own miniature Reese’s peanut butter cups. On the savory side, we make homemade mini meatballs in light tomato sauce that tastes like Spaghettios (Okay, I confess: that one’s probably mine alone). I have neighbors who preserve their own Alaska-caught salmon and boast that it tastes “as good as from the store.” And probably better, I want to say, but hold my tongue.

On the other hand, maybe it’s not just thrift but the distance you live from town that spurs you to make your own candy bars. What if you’re marooned out in the woods, or snowed in, and you’re craving something decadent and junky? Believe me, you’ll figure out a way to get it.

Last week I was craving a Pearson’s Salted Nut Roll, that wonderful candy bar made right in St. Paul on West 7th Street, but I didn’t want to drive the five miles to the Two Inlets Country Store to get one. So I sifted through some internet recipes and most called for marshmallows, which I didn’t have. In the back of my pantry I found a stowaway jar of Marshmallow Fluff, long past its prime, if that’s even possible. (It tasted fine.) And then for the caramel I melted down all of my mom’s homemade caramels left over from Christmas. (You could use those caramels in little wrappers). I made a snake of marshmallow fluff nougat, covered it in melted caramel, rolled the thing in peanuts, and presto, I had what I wanted. Unlike the salmon that was “just as good” as the canned stuff at the store, this one was better than anything I could buy. 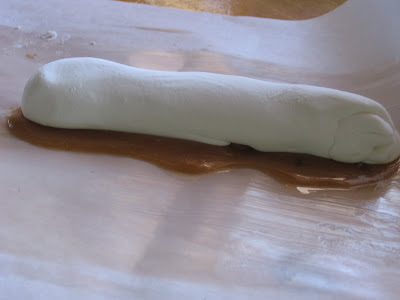 In fact, it was a temptress. After a few days of Aaron and I taking secret turns whittling small chunks off of the nut roll, I walked into the pantry, sure it was all gone by now, to find just the end nubbin wrapped in about an acre of crumpled plastic wrap. Clearly, he was hiding the last of it from me, but as I lobbed it into my mouth I felt no guilt. I can always make another nut roll. Or maybe next time I’ll attempt a Whatchamacallit, a candy bar that I love unconditionally.

Melt the caramels in a sauce pot over low heat.

Beat the sugar into the marshmallow fluff gradually, until it becomes so stiff that mixing is difficult. Turn it out onto a workspace heavily coated with confectioner’s sugar and knead in the rest of the sugar, until it becomes stiff and pliable. Roll into two logs.

Butter the centers of two rectangles (approximately 9 x 13 inches) of parchment paper. Spoon a layer of caramel down the center, in a rectangular shape. Sprinkle with the nuts. Set the sugar roll in the center. (The caramel should be larger.) Cover the roll with more caramel and sprinkle heavily with crushed peanuts, pressing into the caramel.

Immediately slide the roll onto a plate and chill in the refrigerator. Repeat with the second roll.

To serve, trim the excess nuts and caramel and slice into portions. If the roll has flattened, gather the paper around the candy and roll until cylindrical; chill again.

Wrap extra tightly in plastic wrap and store at room temperature. (In a secret place, if necessary.)