This summer, I can understand the impulse to want to stop time. Hey, we waited a long time for the warmth to arrive; it’s really hard to imagine it receding. Six-year-olds aren’t the only ones who say this out loud, but I think they might express it best.

For example, yesterday Hank said, “I want it to be summer all year long. I want the same cars to always be parked at the Two Inlets Store, and the same birds to be in the same trees, and the same moon—all the time.” He barked this with the same petulant tone he uses when begging for a new toy or when he wants me to let him wear an old dirty shirt to town.

What he said stuck with me, and so later on I took up with my camera and ran around to hunt flowers. My flower beds actually begin their life on New Year’s Day—when I allow myself to place the first flower and seed order—but the entire project usually peaks now, in early August. 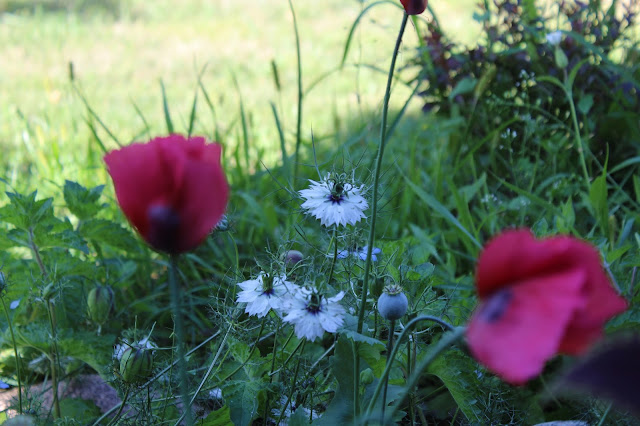 I have a soft spot for this particular spot. Next year I will be sure to again drop the Nigella (love-in-a-mist) seeds amongst the poppies. 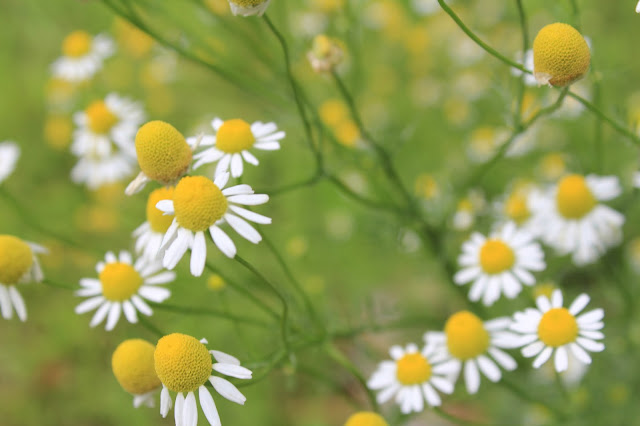 I planted some chamomile in the herb garden this year, and it is one capable plant. Grows without any bother. In the morning, the entire clump is a mass of tight yellow fists, but by early afternoon they’ve all unclenched their long, white petals—around the time of day you might be ready for a cup of tea.

And there’s nothing to it: blooms plus hot water. After two minutes of steeping, I netted out the buds with a slotted spoon and then added a stream of wildflower honey to the pale yellow—already floral—tea. I suppose I could pick and dry the flowers for winter. But now that I’ve had it, I really prefer my chamomile tea fresh, and wonder what kind of luck I’d have if I just dug the clump and brought it inside to overwinter. 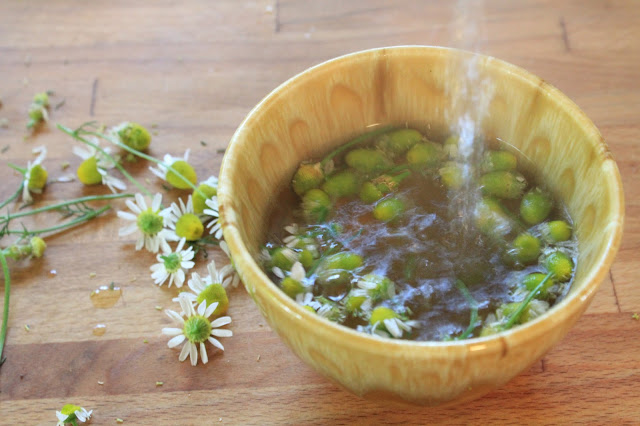 But the best thing I made this week was probably even simpler: boiled eggs with brown butter and herbs. We were in New York City for a few days, and the day that we finally woke up in our own house I was just so glad to get back to my morning boiled egg-routine. These barely-set boiled eggs seem summery to me.  I submit them to a quick two minutes of rumble and then 10 minutes of sitting in the hot water, all uncovered, and never timed. (Because it’s too early for that.) The perfect eggs have crumbly but tender yolks and whites with a soft bounce.

I did four of them, split them open, and sprayed them with salt and pepper. This time instead of drizzling the tops with olive oil I cooked a big spoonful of butter (3 tablespoons or so) until it foamed and turned maple-brown at the edges, then dumped in a 1/2 cup of mixed chopped herbs (chives, basil, parsley) and poured the contents of the pan over the warm eggs. Mixed with all that nice butter the yolks were halfway to cake; they left bright yellow trails all over my toast.

And do you want to know what Hank did later in the day? He conceded. He gave in to the grand march. “You know about everything staying the same?” he said with one of those little kid sighs, that zen thing they do. “I give up, Mom.” Which he said as if it were kind of a relief. 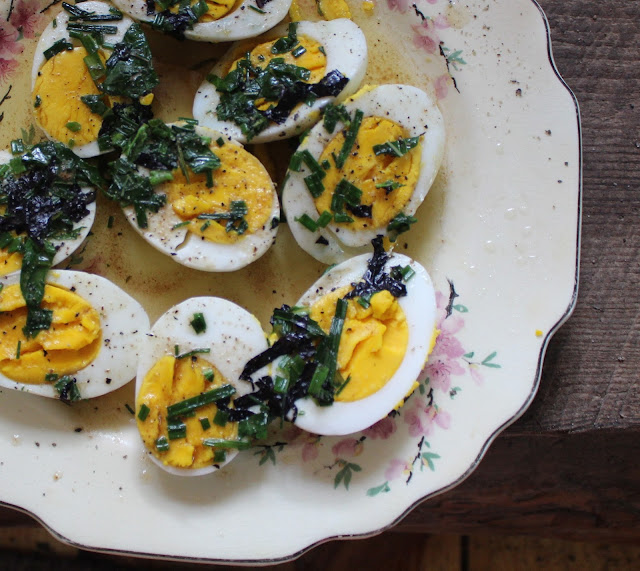 ‹ Green Tonic, or Bacon with Benefits