Ah, lovely. Vietnamese Shaking Venison in front of the Christmas tree. It’s become a bit of a tradition for me to cook strictly Asian food between Christmas and New Year’s, and I tell myself I do it  to give my body a break from all the butter and cream, but the truth is, I also crave the big flavors. The triple-threat of lemongrass, ginger and lime could cut a blizzard wind, and the rush of chili lifts my mood as surely as a few extra hours of daylight might.

For years I’ve been meaning to make Charles Phan’s Shaking Beef from his famed San Francisco restaurant,The Slanted Door: little cubes of beef tenderloin seared in a pan until medium rare and swirled in a rich and spirited Asian brown sauce … but I never seem to find myself with beef tenderloin on hand. I do, however, have a bunch of frozen venison tenderloins clacketing around in my deep freezer, and I seem to remember that my friend Mai Ly (a fabulous Hmong cook from St. Paul who let me into her kitchen for a single, glorious day) mentioned that venison was very common in Cambodia, Laos and Vietnam. There they hunt the native Sika deer, an old strain of deer that retains its spots into adulthood. Come to think of it, maybe it was Minnesota deer hunting that drew the Hmong people to Minnesota, not the Lutheran Church, as widely thought. They certainly didn’t come for the weather. 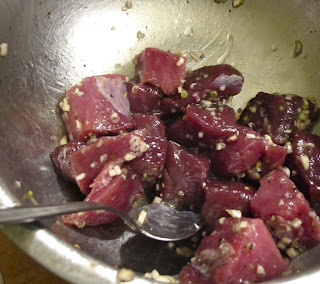 So I just went for it, cutting up the venison loin into 1-1/2 inch cubes: large enough to take a sear and still remain nice and pink inside. I followed Chef Phan’s recipe for the most part, but I added a spear of minced fresh lemongrass to the marinating meat (lounging in plenty of chopped garlic and black pepper above) and I made the sauce to taste. 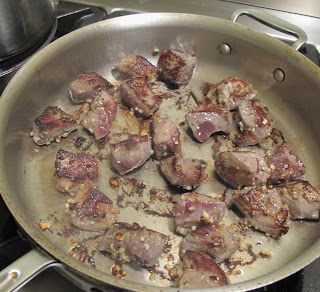 This is not a beautiful shot, and all should immediately notice the almost-too-dark meat impressions on the bottom of the pan—although, as an aside, I do think that Asian food can take the junkier, this-side-of-burnt pan flavors in stride … just think of it as extra umami. But the cooking teacher in me just wants to point out that we should always leave at least this much room between meat chunks when browning. The spaces are critical, for if the meat is packed in tightly it will sweat and steam and never form a nice crisp dark brown edge, as you see above, and never taste quite as bright either. Steamed meat not only looks different than sauteed meat, it tastes muffled. Or as we would say in our Dr. Seussian household these days, it tastes like miff muffered moof.

I browned the meat deeply on two sides, but left the sides untouched and the venison still rare inside. At this point, I deglazed the pan with the simple “shaking beef” sauce: soy sauce, rice wine vinegar, grated ginger, sugar, fish sauce, a touch of spicy sriracha, and then added lime juice to taste. (I used about two tablespoons.) By the time it hit my plate, the venison was cloaked in a rich and spicy sauce but perfectly rosy and juicy inside.

Hunters, take note! This is by far the best venison dish I’ve ever made. And that’s bumping venison bolognese (which I set high above the traditional one) and venison chili (whose rights I will fight for) into second and third place, respectively.

P.s. Should you find yourself on the hunt for more great game recipes, be sure to check out Hank Shaw’s website: Hunter, Angler, Gatherer, Cook. It is the mother lode.

Cut the vension loin into 1 1/2-inch cubes. Peel the lemongrass until you reach a pliable center stalk. Cut off the dry ends and then finely mince the tender part. Add to the beef, along with the minced garlic, half of the canola oil, salt, half of the sugar and the freshly ground black pepper. Marinate at least one hour and as long as overnight, refrigerated.

Assemble your vegetable platter: Using your largest platter, lay lettuce leaves around the edges, then fill the middle with shredded cabbage and carrots. Ring the lettuce with coins of cucumber and sprinkle the center mound with torn basil. Or do whatever you like. Just make any sort of vegetable bed. Here’s mine, for reference. Fresh torn mint in place of the basil would be good, and I might have thrown fresh bean sprouts on this if I’d had some. 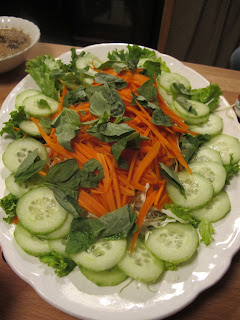 For the sauce, simply combine the soy sauce, water, rice wine vinegar, fish sauce, ginger, sriracha and remaining tablespoon sugar in a small bowl. Heat a large saute pan over medium-high heat and add the remaining tablespoon of canola oil. Add half of the meat in one layer, leaving plenty of space around each piece, and sear deeply on each side.

Remove the browned meat to a bowl and repeat with the rest of the venison. When the second side of the second batch has browned, add the rest of the meat to the pan and add the sauce. Swirl to combine and heat the meat through. Taste the sauce and add lime juice, spoonful by spoonful, until it tastes rightly balanced: not sour, but vibrant. I used about 2 tablespoons. Pour the meat cubes and all of the sauce over the platter of vegetables. Serve with steamed rice.

Steak in the Sauna ›