Let me tell you something about the small-town northern Minnesota grocery store in the middle of winter. In December the parking lot at J and B (Jeff and Bob’s) freezes into a corrugated sheet of ice, like the surface of Pluto, and it stays that way until March. Propelling your full cart over the molded ice to the back of your car for unloading requires a good bit of strength, and a tolerance for the particularly grating sound of the cart vibrating over the ridges.

That’s just the parking lot. Inside you’ll find a store with more stockpiled food than a survivalist village’s end-of-time bunker. To give a Brooklyn equivalent, just one of the two grocery stores here in town stock more than any of the small Met Foods in any neighborhood in Brookyn; each of them have middle rows whose selections rival a Fairway, one of the few truly comprehensive stores in New York. The meat selection is stupendous here, with a smokehouse on the premises. The produce department, however, reminds us where we are in the world: isolated, and pretty near to its frozen top.

So when I see something that looks fresh, the nutrient-seeking animal in me pounces on it, blind to provenance or seasonality. The other day, asparagus, well out of season here, must have been in season somewhere because it stood regally in the center of the produce aisle and it nabbed my eye immediately. I snapped up two bunches, and back at home I made a wild and surprisingly delicious mid-winter stir-fry that met my hunger for big green flavors full-on, a garlicky mix of asparagus, shell beans, shiitake mushrooms and—wild card—cheese curds. 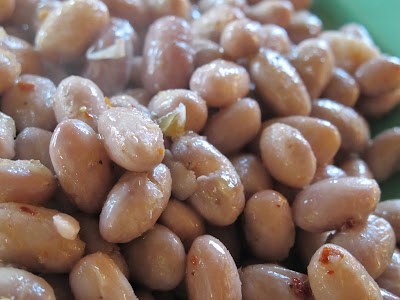 The shell beans, at least, were from my summer garden. I picked them in the late summer the minute they filled out, slit the moist pods and dragged out the cool beans with my thumb, and then weighed, cryovacked and dropped each packet into the bottom of my deep freezer. I moved them to the door of my refrigerator a few days ago, and there they sat, plenty well-thawed, just gathering the nerve to go bad on me. Possibly more than any other thing that comes out of my garden, I adore shell beans, plucked at the adolescent stage when they seems more like vegetable than starch.

The odd addition of melted hunks of cheese here has not one but two real precendents. My mother often made a private meal for herself of quickly pan-fried zucchini, onions, tomatoes, toasted walnuts and cubes of white melting cheese. She offered to make extra for us kids, and we always declined, but more often than not one of us would bring a fork to her side and eat about half of her plate. Eventually she wised up and just started making a double batch. But there was something very intriguing in the odd combination of ingredients, and I’ve never been able to forget the semi-molten clumps of cheese.

And then a few days ago, at Perennial Virant in Chicago, I ate the most amazing starter, a hybridized Italian/Midwestern risotto cake into which whole Brunkow cheese curds had been folded. The risotto was then chilled, sliced, and panfried until the rice grew a delectable crust. I loved how Chef Paul Virant paired it with a pile of tangy olive-drab pickled green beans to contrast with the bites of soft rice and mellow cheese dragged out into long spooling webs. Days later, the combination of green vegetable and melting strands of white cheese was still front and center, demanding some sort of repetition.

If you have frozen shell beans in your freezer, cook them for 25 to 30 minutes in lightly salted water and drain … but it’s my guess that no one has cryovacked packs of shell beans in their freezers. Put it on the list for next fall, but in the meantime, drain a can of borlotti or cannelini beans and proceed from there.
Wash the asparagus, snap off the ends and cut diagonally into 2-inch lengths. Rinse the snap peas and pull back any wiry ends. Slice the shiitake mushrooms.
Heat the olive oil in a large saute pan over medium-high heat. Add the shiitake mushrooms and cook, tossing, until they start to brown. Add the asparagus and garlic, season with a little salt and pepper, and cook until the mushrooms are dark at the edges and the asparagus is cooked through. Add the sugar snaps, red pepper flakes, and final seasoning, and cook until the peas are warmed through. Add the cheese curds, toss in the hot pan, and serve immediately.